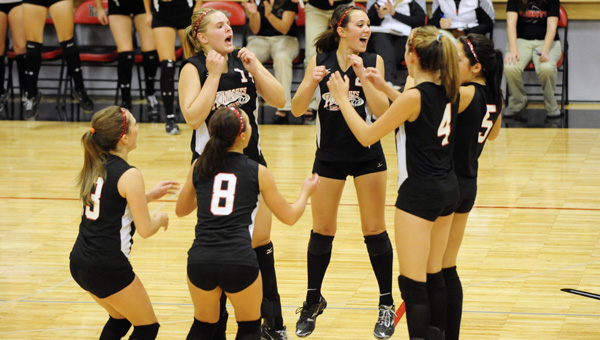 Alden-Conger volleyball players celebrate a point Monday during the second game of a win over Glenville-Emmons. -- Andrew Dyrdal

ALDEN — Jolene Bute’s Alden-Conger volleyball squad has lacked a vocal leader on the court — until now.

On Monday night she emerged as the team’s leader on the court.

During the team’s three-set victory over Glenville-Emmons 25-15, 25-11 and 25-10, Keller showcased her skills in the mid- and frontcourt by recording 10 kills and seven digs.

“Up to this point we didn’t have a leader and that is something we have been talking about with Ariel,” Bute said. “She is a very good athlete and a great leader off the court. Now she needs to be that great leader on the court.” 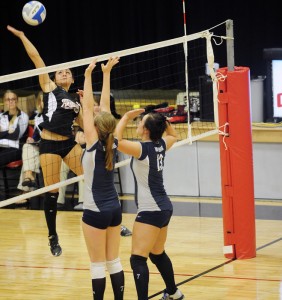 Alden-Conger outside hitter Ariel Keller, left, attempts a kill Monday over a pair of Glenville-Emmons blockers in Alden. Keller led the Knights with 10 kills as the team swept the Wolverines 25-15, 25-11 and 25-10. -- Andrew Dyrdal

Alden-Conger was able to use their presence in the backcourt to establish a lead and then power their way to victory in the frontcourt.

After the Knights conquered the first set 25-15, they were able to establish a 7-2 lead early in the second set.

From there Alden-Conger won eight straight points giving them a 15-3 lead. Keller, along with Karina Skov and Brooke Reyerson showed their presence at the net in developing the lead and eventually winning the set 25-11.

“We focused on playing volleyball, focused on our game,” Bute said. “We did falter a little bit.

“When they’d call time outs it was like ‘You know what, we need to get back on our game plan and get this job done.’”

Four of the Wolverines’ 11 set points came while Morgan Schumaker was serving, including two service aces.

The final set is where Keller really shined. The junior recorded five of her 10 kills in the stanza. Skov added two service aces in the set, as did Kelsey Behnke.

Reyerson closed out the match with the Knights’ final point via another service ace.

“We really work on that a lot in practice, in serving,” Bute said. “More so being consistent in our serving. Our goal is to get three games a year consistently serving 100 percent.”

The Knights are more than halfway through their schedule but have struggled recently, dropping seven straight matches since beginning the year 2-1. 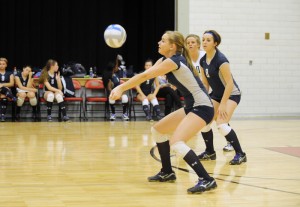 “I am happy with the progress,” Bute said. “There are a couple of games that I really would have liked to see us win.”

Alden-Conger will travel to Blooming Prairie and the Wolverines will look for their third victory of the season at LeRoy-Ostrander tonight. The games will begin at 7:30 p.m. and 7:15 p.m., respectively.