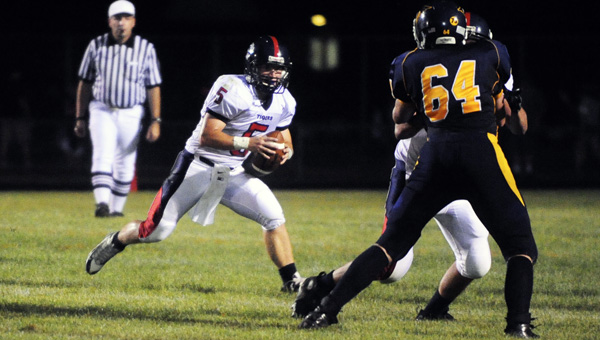 Albert Lea quarterback Ethan Abben (5) looks to run with the ball in the second quarter Thursday night against Waseca. Abben rushed nine times for 23 yards as the Bluejays scored 42 answered points to beat the Tigers in both teams’ season-opener. -- Andrew Dyrdal

WASECA — Max Jeffrey had his work cut out for him in his first game since being named head coach of the Albert Lea Tigers football team.

Albert Lea (0-1) couldn’t manage to stop the run and four starters suffered injuries on a team that is already struggling to find depth at many positions — all in a 42-7 defeat at the hands of the Waseca Bluejays (1-0).

The one thing Jeffrey could do was make sure his players were having fun, which is something the first-year head coach hopes to 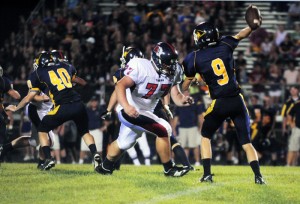 make sure his players are doing all season.

“That is what we need to do. We need to have fun,” Jeffrey said. “We’re out here playing a game. We have to have fun with what we’re doing.”

After trading opening possessions with the Bluejays, Albert Lea got on the board first. Working out of the spread formation that Jeffrey installed this season, quarterback Ethan Abben found Makael Lunning on a screen pass and the junior running back made a quick move to the left and was off to the races on an 87-yard touchdown reception.

Trouble would ensue on the following possession when Waseca running back Brock Kolander took the kickoff 64 yards to the Albert Lea 16-yard line. Two plays later Kolander, found a hole through the middle of the Tigers’ defense and scampered across the pylon on a 13-yard run.

Albert Lea’s offense couldn’t muster much after their lone scoring drive of the game, but they had their hands full on defense. On Waseca’s opening drive of the second quarter, they managed to travel 65 yards on eight plays capped of by a one-yard touchdown run by Leo Hoehn. 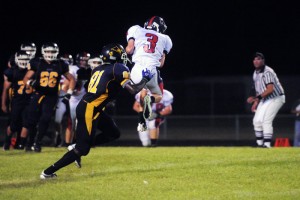 “That’s a good football team,” Jeffrey said. “They got off to a good start and we didn’t quite get off to the start we wanted.”

Silence hit the stadium late in the opening half when Lucas Hansen, a member of Albert Lea’s starting secondary, remained down on the field for several minutes following a tackle.

The junior was carted off the field and transported to the local medical center for x-rays on what appeared to the trainers as either a broken bone in his lower left leg or in his ankle.

When play resumed, Waseca went back to work grinding out runs against the Tigers. They would score again on Zach Gehloff’s 14-yard run up the gut of Albert Lea’s defense.

Kolander scored two more times in the third quarter on runs of two and 29 yards. The junior finished with 147 yards on 18 attempts and three touchdowns.

Hoehn tacked on the games final touchdown, when he blazed through the Tigers defense for 45 yards and the score.

Jeffrey said Albert Lea can’t just hang their heads and they will return to work this week to improve for their home opener against Owatonna next Friday night at 7 p.m.

“We have to get some work on the offensive line up front,” he said. “We’ll go back to work, watch some film tomorrow and take care of some things.”

Before the Tigers can prepare for next week they will have to address the injuries they sustained in the game.

Lunning didn’t return for the second half after suffering leg cramps and Abben sat out the final series after sustaining cramps of his own. Clayton Bratten took a helmet to his mid-section in the fourth quarter and will have to be evaluated.