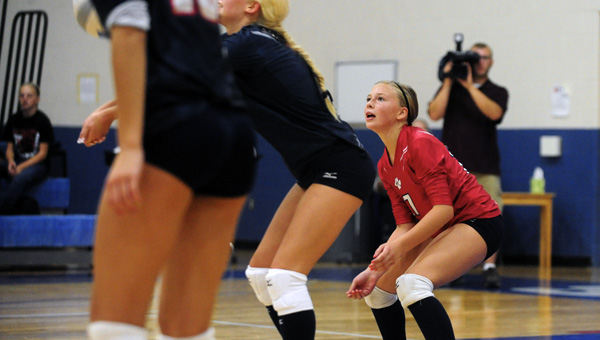 Camryn Keyeski is a typical 12-year-old.

On the brink of a new school year, she’s spending the final days of summer’s freedom riding bike and hanging out with friends before starting her first and final year at Southwest Middle School. There’s one thing though that makes Camryn unique. Something extraordinary. She’s the starting libero on Albert Lea’s varsity volleyball team.

Varsity is the only volleyball team Camryn has ever played on in Albert Lea. She’s never been old enough to play on any other. She’s now the youngest player on one of the state’s youngest teams but doesn’t act like it. 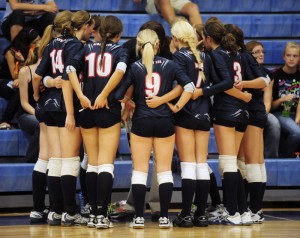 The Albert Lea volleyball team huddles together during its first win of the season on Monday against Southland.

Camryn plays libero, a defensive specialist position that’s expected to be a vocal leader on the court, something that is a tall task for any ordinary 12-year-old in a grown-up girl’s game.

“At first the other players were like ‘There’s a seventh-grader telling me where to go.’” Camryn said. “Now they’re OK with it because they know my role.”

Camryn began playing volleyball at age 9 when she tried out for the Northern Lights 11-and-under team, a club team out of Burnsville. The middle schooler played in the club program through this summer when she played in a tournament in Florida against teams from Puerto Rico and elsewhere.

This fall she tried out for Tigers with the intention of making varsity. Before the season started, the team’s coach, Jaime Mauseth, called Camryn’s parents to tell them she’d like her to start. When she received the good news, Camryn said she had mixed emotions.

“It was amazing,” she said. “But I was nervous. I knew my teammates and didn’t worry about that but playing against 17- and 18-year-olds, it was just … different.”

But Camryn is not the only seventh-grader on the Tigers varsity team. Her classmate, Julia Deyak, is also on the team along with two ninth-graders, three sophomores, a junior and three seniors. This group is off to a 1-2 start to the season but Mauseth already sees potential for success.

“This year, girls are having the most fun out on the court and in practice,” Mauseth said. “Confidence has been a problem in the past but they really feel like they can do great things.”

When Mauseth arrived in Albert Lea three years ago, the team’s sophomores – Annie Ladwig, Bryn Woodside and Sydney Rehnelt – were in eighth grade. Mauseth said she immediately knew they were special.

“They are very skilled athletes, very competitive and they want to win,” Mauseth said. “They know what great leadership is and they take direction very well.”

With such stark age differences among the squad, Mauseth said she’s spent a lot of time this season working on teambuilding. She said the team has scheduled pasta parties, and after practice the girls spend time building team unity and mental toughness. 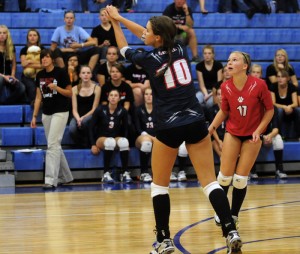 Camryn Keyeski, right, and Annie Ladwig are first cousins and have been playing volleyball together since Annie was Camryn's age.

The results are obvious.

To open the season, the Tigers won one game off a tough Farmington team and came from behind to win three straight games over Southland for its first win of the season. The team is emotional and isn’t afraid to celebrate colorfully after each point won.

“This team shows their emotions and gets very excited when they do well,” Mauseth said. “That’s something I push for. They’re not quiet, and that’s what I like about them. They’re proud and show it.”

Mauseth said there are advantages and disadvantages of having a young team. She said the team’s youngest girls are still acclimating to varsity’s pace of play but that she has time to build a title-contending team.

“I get to work with them and get to do what I want to do … my vision,” Mauseth said. “We have years to work on that identity.”

Mauseth said in the coming years she expects the Tigers to contend in the Big Nine Conference.

“We’re going to set some really big goals because we think we can reach them,” she said.

Camryn’s a big part of that plan.

Mauseth said she was concerned early about how Camryn and Julia would mesh with the team’s older girls but that they’ve been accepted with open arms.

“They came up to me and said ‘These seventh-graders are awesome,’” Mauseth said. “Everybody sees how talented they are and wants this team to be good. They accepted them and that makes Camryn and Julia very comfortable.”

Camryn said she was nervous before her first career game against Farmington. Coming from elementary school, the change of environment to a high school event was dramatic.

“The atmosphere is different with all the fans and warm ups,” Camryn said. “I didn’t know what to do when my name was called.”

She also said she wasn’t sure how she’d get along with the team’s upperclassman.

“It’s so different being 12,” Camryn said, adding that she’s used to being the youngest with two older brothers.

Camryn’s transition to the varsity spotlight though has been eased by the presence of Ladwig, her first cousin.

“I think that it helps that there’s family there,” Ladwig said. “She’s fun. She’s doing great and playing amazing. I’m really proud of her.”