Funeral services for Warren David Jensen, 81, of Albert Lea, will be held at 11 a.m. Friday at First Lutheran Church. The Rev. Daniel Baker will officiate. Interment will be at Graceland Cemetery with military honors accorded by Freeborn County area veteran’s organizations. Visitation will be one hour prior to the service at the church. To sign the guest book, go to www.bayviewfuneral.com. 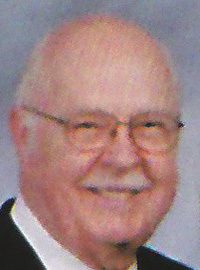 Warren David Jensen was born on March 8, 1930, to Martin and Adena (Fredricksen) Jensen in Albert Lea. He grew up in the Clarks Grove area and graduated from Albert Lea High School. After graduation Warren was drafted into the United States Army. During his enlistment he was particularly proud of the fact he assisted in the apprehension of Puerto Rican Nationals that launched an assault on Congress in 1954. He kept an account of the event with photos cut from a newsreel and articles that, due to his assignment in Counter Intelligence Corp, could not give his name. The article appeared in the Baltimore newspaper and Harlan, Iowa, local paper. After his discharge Warren returned to Freeborn County. He was a very talented entrepreneur that started several businesses. The last of which, Jensales, Inc., is still based in Manchester. On May 20, 2000, he married Marlene (Wolff) Rickheim. Warren was an active member of First Lutheran Church. He was also a member of the Scottish Right, Shriners, Kiwanis, American Legion and Salvation Army. Warren enjoyed collecting classic cars, scrapbooking and stock market investing. He loved visiting with his friends, especially with the coffee gang at Nancy’s. Warren also enjoyed spending time working on his hobbies, loved his dog Sam and treasured time spent with his family. He will be deeply missed by all who knew and loved him.

Warren was preceded in death by his parents; brothers: Owen, Homer, Howard and Obel; sisters: Ruth and Gale; brothers-in-law: Gordon, Swens and Alf; and sister-in-law, Edna.