Darci Bantz and Michael Venem were united in marriage by the Rev. Fred Richart during an afternoon ceremony on Saturday, Dec. 4, 2010, at the United Methodist Chruch in Auburn, Neb. 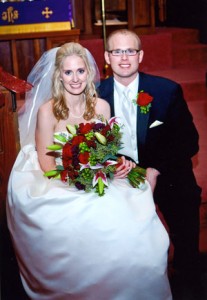 Ushers were Mark Hrubes, of Burnsville, Chris Venem, of Glenville, and Matthew Zuba, of Milwaukee, Wis.

Candlelighters were Kaley Smith of Wilmington, N.C., and Taylor McCain, of Lowell, Ark., both cousins of the bride. Flower girl was Nevaeh Weborg and ring bearer was Jack Emerson, both friends of the couple. Reader was Mary Ann Venem, of Albert Lea, aunt and godmother of the groom.

A dinner reception and dance followed at the Lied Lodge in Nebraska City, Neb.

Darci is a 2001 graduate of Auburn High School and 2009 graduate of the University of Nebraska — Lincoln with a doctorate of audiology. She is a clinical audiologist in the Twin Cities.

Michael is a 1996 graduate of Albert Lea High School and 2002 graduate of the University of Minnesota with a master of science in biosystems and agricultural engineering. He is a business development sales manager in the Twin Cities.

After a honeymoon in Hawaii, the couple resides in St. Paul.