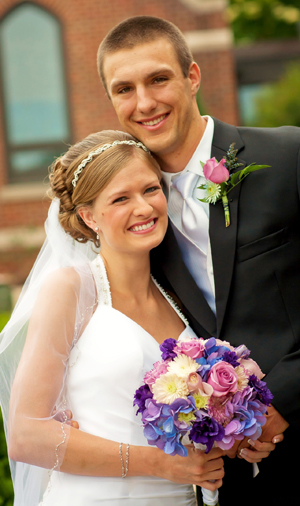 Personal attendants were Abby Lewis, of Laramie, Wyo., Jill Moses, of Marion, Iowa, Jessica Allison, of Des Moines, Iowa, and Jada Hallengren, of Birmingham, Ala., all friends of bride

Program attendants were Katie and Eleney Owens, cousins of the bride, daughters of Steve and Jane Owens, of Wilton, Iowa.

A reception following the ceremony was held at Wedgewood Cove Golf Club.

Host couples were Mike and Suzanne Moore, Steve and Cindy Merfeld, and Gary and Alice Schrad, all of Albert Lea.

The bride is a 2004 Albert Lea High School graduate, a 2008 Cornell College graduate and a 2010 graduate of University of Iowa Doctor of Physical Therapy program. She is a physical therapist in Coralville, Iowa.

The groom is a 2007 Albert Lea High School graduate, a 2011 Cornell College graduate and will graduate in 2013 from University of Iowa Doctor of Physical Therapy program.