Amber Watney and Eric Johnson were married on May 14, 2011, at the Kalahari Resort and Convention Center in Wisconsin Dells, Wis. Troy Timmerman, uncle of the bride, of Blue Earth, served as officiant for the double-ring ceremony. 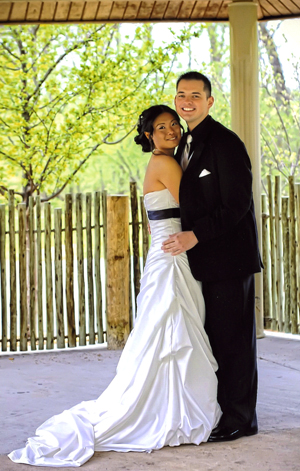 Parents of the bride are Gary and Kathy Watney, of Albert Lea.

Parents of the groom are Peter and Linda Riedl of Jefferson, Wis., and the late David Johnson.

Maid of honor was Sarah Watney, sister of the bride, of Albert Lea. Bridesmaid was Sara Gittins, of Madison, Wis., friend of the couple.

Ushers were Mark Jilek, uncle of the groom, of Rockford, Ill., and John Frazier, cousin of the bride, of Rogers.

The bride’s personal attendant was Christie Tonies, friend of the couple, of Lincoln, Neb.

Following the ceremony, a reception was held at Trappers Turn Golf Club in Wisconsin Dells, Wis.

Music for the ceremony and reception was provided by Jukebox Bandstand, of DeForest, Wis.

Photography for the event was provided by Blinkabella Photography, Sarah and Darryl Nethercot, friends of the couple, of San Diego, Calif., and flowers were done by Wild Apples Floral, of Baraboo, Wis.

Amber is a 2002 graduate of Albert Lea High School and a 2007 graduate of the University of Wisconsin-Madison with a bachelor’s of science degree in biology and sociology.

Eric is a 2000 graduate of Andersen County High School in Clinton, Tenn., and a 2003 graduate of Roane State College with a degree in general science.

The couple recently purchased a house in Sun Prairie, Wis., and they reside there with their dog Sam and cats: Ruby and Charlie. Both work in pharmaceutical research in Madison, Wis.