Funeral services for William B. DeBoer, 96, of Albert Lea and formerly of Hollandale, will be held at 11 a.m. Saturday at the Faith Baptist Church. The Rev. Dennis Seiler will officiate. Interment will be in Graceland Cemetery. Visitation will be from 9:30 to 11 a.m. at the church, prior to the service. To sign the guest book, go to www.bayviewfuneral.com. 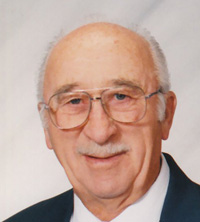 William Bartold DeBoer was born of Feb. 19, 1915, in Assen, Holland, the son of Bartold (Ben) and Janna (Bos) DeBoer He emigrated from the Netherlands at age 5, arriving at Ellis Island on the USS Lapland, March 31, 1920. Bill grew up and went to school in the Platt, S.D., area. On Feb. 19, 1941, he was united in marriage to Sadie P. VanderPloeg in Hollandale. The couple farmed in Org, moving to Hollandale in 1947. Bill was a member of Faith Baptist Church, the Gideon’s for 67 years, and the Golden K-1 Kiwanis. He enjoyed travelling. Farming was both Bill’s occupation and his delight.

Bill was preceded in death by his parents; his brother, Henry DeBoer; and sisters: Hattie and Marie Steensma.

Memorials are suggested to the Gideon’s International.