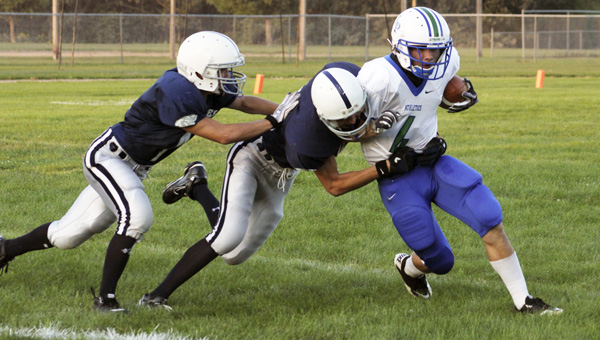 Lyle-Pacelli running back Damian Haugen attempts to run against the Wolverines. Glenville-Emmons held the Athletics to 98 yards rushing. -- Garrett Wampler

GLENVILLE — Even after a 68-2 victory Friday over Lyle/Pacelli in a Southeastern Conference matchup, there was time for the Glenville-Emmons football team to remember one of their fellow students and breakout of their team huddle to her name, “Kayla.”

Glenville-Emmons (1-1, 1-1 Southeast) dedicated this football season to Kayla Koch’s memory, the Glenville teenager died on Sunday, July 10, as a result of an ATV accident. The team observed a moment of silence before the game and all of the players wear the initials K.K. on the back of their helmets.

“She was a great kid,” Glenville-Emmons head coach Ryan Kelly said. “We’ve dedicated our season to keeping her in our memory.” 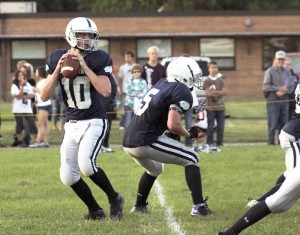 Glenvill-Emmons quarterback Wyatt Madson looks to pass the ball Friday during the first quarter of a 68-2 win over Lyle/Pacelli in Glenville. Madson passed for 56 yards. -- Garrett Wampler

After a moment of silence, the Wolverines were ready to play football. The opening drive stalled at their own 24-ard line, and Kelly sent out the punt team. A botched snap lead to Derek Olson getting tackled in the end zone for a safety that put the Athletics (0-2, 0-2) on the scoreboard first with a 2-0 lead.

The Wolverines would recover quickly and get back to work on offense. A 25-yard pass from quarterback Wyatt Madson to tight end Andrew Everson set up a first-and-goal from the Lyle-Pacelli nine-yard line.

From there the offensive line began opening up holes and allowed for Olson to score on a sweep to the right side. Olson dove across the pylon for the score. The junior finished the game with seven carries for 34 yards and two touchdowns.

“They were putting up a good fight,” offensive guard Blake Lundmark said. “Our line just stuck it out, blocked well and played hard.”

The first Glenville-Emmons touchdown began a string of 68 unanswered points for the Wolverines, including 30 points in the second quarter and 22 points in the third quarter.

It didn’t matter who the running back was on Friday night, the offensive line opened up holes for everyone on the field.

“We were fired up. The kids got after it and they played well,” Kelly said. “They played hard and we have to keep that rolling.”

The Glenville-Emmons’ running back-by-committee system allowed the Wolverines to rack up 415 yards rushing against the Athletics. Nine different players had multiple rushes and seven of those players scored touchdowns on the ground.

“The line blocked well. The backs ran hard, and that is nice to see,” Kelly said.

Sophomore Justice Haines lead the Wolverines on the ground even though he didn’t touch the ball until the second half. Haines finished the game with 128 yards on eight carries, including a touchdown run of 45 yards in the third quarter.

With only the safety counting as points for Lyle-Pacelli, they have still yet to score an offensive touchdown this season. Their only touchdown came in week one on a punt return.

The Wolverines return to the field next Friday night when they go on the road to face LeRoy-Ostrander. Last season Glenville-Emmons left LeRoy with a 36-12 victory during the second week of the season.