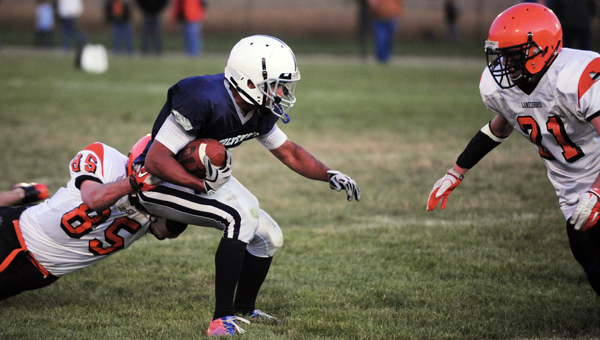 Glenville-Emmons’ wide receiver Perry Kirsch is tackled Friday by Lanesboro’s Cory Strom (85) during the first quarter of a 41-6 in Glenville. -- Andrew Dyrdal

GLENVILLE — The last time the Glenville-Emmons football team faced Lanesboro, it was at the end of a magical postseason run last November and marked the first time in school history the program had reached a section final game.

Despite losing 52-8, the accomplishment served as a moral victory.

There were none of those the second time around.

Lanesboro scored touchdowns on six of its first seven possessions Friday and didn’t punt until late in the third quarter in a 41-6 win over Glenville-Emmons in Glenville.

“We got beat. Period. End of story,” Wolverines coach Ryan Kelly said. “It was disappointing, but we’ve got to come back out on Monday and start back up again.”

The Wolverines’ (2-2, 2-1 Southeast) offense ran into trouble from its first possession. After receiving the opening kickoff, junior Derek Olson rushed for 10 yards out to the Wolverines’ 40-yard line. On the ensuing play, quarterback Wyatt Madson’s pitch to the running back missed and the Burros (3-1, 2-1) recovered the fumble at the Wolverines’ 30.

The Wolverines’ experienced defensive line held the Burros’ physical running back, Brandon Hongerholt, in check over the next three plays and forced and fourth-and-1. Hongerholt rushed 5 yards for a first down before consecutive negative rushing plays set up third-and-15 from the 20. Wolverines players bit on a play action pass and the Burros’ Braden Hanson passed to Steven McElmury for a touchdown.

The Burros’ offense didn’t relent for the rest of the half and built a 29-0 lead before the break as the Wolverines struggled moving the football.

The Wolverines’ second offensive possession was its best of the half as Perry Kirsch had two receptions for 23 yards, and the team moved the ball to the Burros’ 15. After a fumbled snap set up fourth-and-9 from the 19, the Wolverines turned the ball over on downs following a 2-yard run by Kirsch.

After trailing by 29 points at halftime, Kelly said he was pleased his players were still playing aggressively in the second half.

“We didn’t stop,” the second-year coach said. “We weren’t standing around, we weren’t waiting for them to bring it at us and that’s a good sign.”

The Wolverines scored its lone touchdown of the game after receiving Lanesboro’s only punt of the game at the beginning of the fourth quarter.

Beginning at his own 29-yard line, Madson did just about everything as the Wolverines marched down the field. Madson opened the drive with a 36-yard run across midfield and connected with Olson for a 15-yard gain. Madson passed to Olson for 5 more yards and rushed 6 yards to set up first-and-10 from the 18.

Senior Caleb Schumaker brought the Wolverines within the 10-yard line for the only time all game with a 10-yard run on first down, and Madson added another 2 yards with his feet. On second-and-goal from the 6, Madson threw a short pass to Kirsch, who ran the ball in for the touchdown with 8 minutes and 24 seconds remaining in the game to make the final 41-6.

Kelly said the Wolverines need a faster start next week on the road against undefeated, seventh-ranked Spring Grove, who beat Lanesboro 28-0 in Week 2.

“That first drive turnover killed us,” Kelly said. “We cannot let teams push us around. We’ve got to play better there’s no two ways about it.”

Kelly added that there’s a mental block the team must get over.

Kirsch led the Wolverines in rushing with 42 yards on 10 carries. Olson had three receptions for 30 yards, and Madson was 8-of-15 passing for 73 yards and a touchdown.