You can return home again 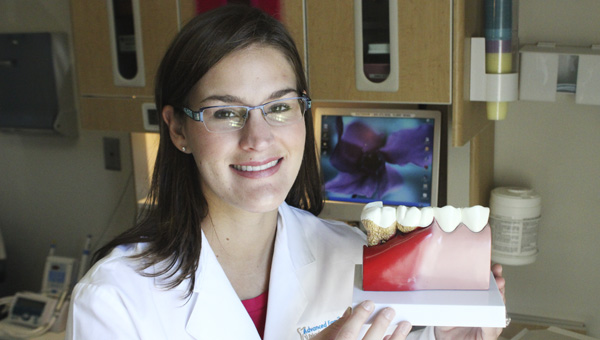 A native Albert Lean who worked as a dentist in Faribault has purchased a local practice and has returned to her hometown.

Dr. Rachel Nolander closed Sept. 1 on the purchase of the Albert Lea Dental Clinic from Dr. Robert Harold in the Professional Arts Building at 1206 W. Front St. The next day, the place had a new name: Advanced Family Dental.

It opened to patients last Tuesday.

“The current patients of Albert Lea Dental Clinic will feel at home in the new Advanced Family Dental,” she said.

After 32 years of dentistry and nine of them in Albert Lea, Harold is heading into teaching. He and his wife, Cheryl, are moving to Florida. She said a back injury he has is getting medical attention that will require a lengthy recovery time and would make continuing in dentistry — leaning over patients to look into their mouths — difficult.

Cheryl declined to say the school at which her husband will teach.

Nolander had been practicing in Faribault for five years at Southern Heights Dental Group.

It was in her junior year of college at the University of St. Thomas that the 1999 graduate of Albert Lea High School decided she wanted to go into dentistry. Prior, she knew she wanted something to do with medicine.

She had shadowed woman physicians who told her they had to place their careers above family. That didn’t appeal to her. When she got to do a pre-dental internship, she “absolutely fell in love with it.”

“I got to practice medicine in a regular business setting, and it had a high artistic component to it,” Nolander said. “It was a very natural fit of the sciences and arts in one career.”

She graduated from St. Thomas with degrees in biology and chemistry, then went to the University of Minnesota School of Dentistry, where she earned a doctorate of dental surgery.

Patients may have seen Nolander’s advertisements, which call her Nolander-Poppel. She is engaged to be wed to Kevin Poppel on Nov. 12. Because he is a senior sales manager for a large phosphate producer, he is required to reside within his territory. That freedom to relocate, though, allows him to move from Faribault to Albert Lea without any problems.

“This is all really a perfect match. I have been looking forward to coming home to Albert Lea,” she said. “Patients can call me Dr. Rachel.”

Tribune Sports page readers can recall that Nolander was active in sports. She was the captain of the volleyball team and also played basketball and softball. As a senior class officer, she was active on the student council.

In her practice in Faribault, she saw many young children. Though she does general dentistry for all ages, “I specifically enjoy children’s dentistry, root canals and cosmetic dentistry.”

She said she hopes Harold’s patients feel comfortable with her just the same. The purchase price of the practice was undisclosed.

Nolander is the daughter of Dave and Teresa Nolander, the owners of Albert Lea marketing company Marketing Plus. Indeed, it is the company that created her advertisements.