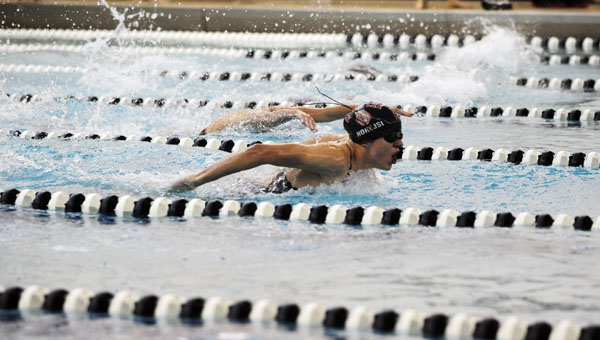 Lindsey Horejsi was victorious in the 200-yard individual medley. She also won the 100 breaststroke in a pool record time of 1:06.68. -- Garrett Wampler/Albert Lea Tribune

Albert Lea never led in the meet, but they pulled within five points of the Rockets after Lindsey Horejsi and Morgan Field finished first and second in the 200-yard individual medley and Karli Kriewall took first place in the 1-meter diving.

Senior Galen Schulz closed out her varsity career at the Albert Lea pool with a pair of second place finishes in the sprinting events. She touched the wall in 25.57 seconds in the 50 freestyle and claimed second in the 100 freestyle with a time of 56.71 seconds.

Horejsi returned to action in the 100 breaststroke. The eighth-grader broke the pool record in the event, pulling into the wall in 1:06.68.

To this point in the high school season Horejsi owns the fastest mark swam in the state of Minnesota in the event.

Albert Lea will now look forward to the Big Nine conference meet on Oct. 29, followed by the section meet held in Austin on Nov. 5 and 7.

See the scoreboard for complete results.