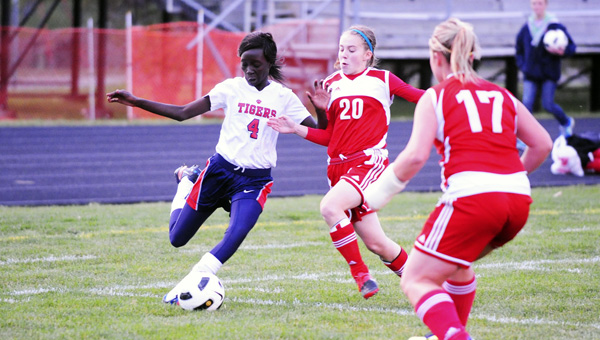 When high school sports reach the playoff season you can be guaranteed one thing: tougher opponents that will leave everything they have on the field to ensure a victory.

The Albert Lea girls’ soccer team, seeded No. 1 in the Section 2A tournament found that out the hard way last Saturday during their 1-0 victory over Austin.

Albert Lea was outplayed and out-hustled, which can’t happen if they hope to make it past today’s foe, the St. Peter Saints.

“It is a muddy road we travel on, not a road that is paved,” said Rick Barnhill, the Tigers’ head coach. “We have a tough journey to get through this tournament but the bottom line is, we survived and that is better than the alternative.”

The No. 5-seeded Saints advanced to the semifinal round with a 2-1 victory over Mankato East on Saturday, setting up the rematch of last season’s section semifinal matchup.

Albert Lea lost that decision 2-0, despite out-shooting their opponent 23 to 14.

St. Peter is making a run at the Tigers’ two consecutive section titles. No other team has accomplished the feat, except for Albert Lea in 2007 and 2008.

“That was a group of different personalities and a little bit older group too,” Barnhill said. “This group is very young and they are still trying to deal with the No. 1 seed.”

Against like opponents this season Albert Lea boasts a 5-1 record, while out-scoring those teams 16 goals to two.

The Saints against the same teams have compiled a 5-3-2 record and have scored 17 goals and allowed 11 tallies in the same span.

Barnhill is coaching a much younger team than the championship runs he enjoyed in 2007 and 2008.

“That team had more scoring ability,” he said. “This team is a defensive team and we just don’t have natural forwards.”

Kelly Nelson, Brooke Hanson and Lindsey Stewart are the only fragments left on the Tigers’ squad from those years. Barnhill has looked to the three players for their leadership in this situation, but knows he will have to lean on some of the younger players if the team hopes to advance tonight.

Can the young team pick up their performance in time for St. Peter?

The Tigers game begins at 7 p.m. tonight against the Saints at Hammer Field.