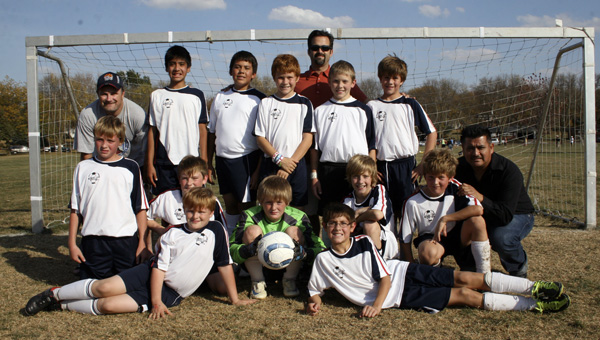 Last weekend another champion was crowned in the world of Albert Lea youth sports.

Albert Lea’s U-12 soccer team capped their season with a state championship in Rochester with a 3-2 victory over Austin.

Unlike other teams that have won state titles over the past few seasons, this squad played the role of the underdog.

They barely found their way into the tournament, but didn’t waste their opportunities when they got there.

The season began with a shaky 1-1-1 start. At the time Pratt said the athletes lost some of their focus and didn’t have the drive they needed to succeed.

Something needed to be done.

Albert Lea’s coaches decided to rev up the practices and push the kids harder to get them more motivated to play and succeed. The strategy was successful as the kids won the next two games, setting up a season finale against an undefeated Austin squad with a trip to the state tournament on the line.

“The kids did their homework by practicing at home,” Pratt said. “There was definitely more focus in practice because they knew they had to put it together to win.”

After trailing 2-1, the U-12 team scored the equalizer in the second half setting up for Tony Huerta Apanco’s heroics at the end of the game.

With 45 seconds remaining on the clock, Apanco dribbled the ball inside the penalty box and buried the game winner into the goal.

Even with the victory Albert Lea still needed help to qualify for the state tournament. They found out later that St. Peter upset Owatonna, 6-2, punching their ticket to the big dance.

Last weekend the team traveled to Rochester for the state tournament as the true underdogs. The first two teams they faced were both undefeated entering the tournament, but that all changed against Albert Lea.

First the U-12 team discarded Edina, 6-2, and then fought their way into the final with a 7-4 victory over New Richmond, Wis., setting up a rematch with Austin. This time the state championship was on the line.

“It was pretty much revenge for Austin,” Pratt said. “We told the kids we had already beat two undefeated teams and this game we had to win.”

Wind gusts of up to 20 mph plagued Albert Lea in the first half. They trailed Austin 2-0 before rallying in the second half.

Playing into the wind, Albert Lea was able to get scores by Bryce Schreiber and Lennon Shimon to tie the game.

Then, as he did in the first match against Austin, Apanco put in the winning tally with under three minutes to play in the game. The defense preserved the score and Albert Lea was lifted to the state crown.

“You could feel the excitement in the kids when the refs blew the whistle,” Pratt said. “The kids erupted.”

Albert Lea finished the year with a 4-1-1 regular season record and a 3-0 tournament mark.