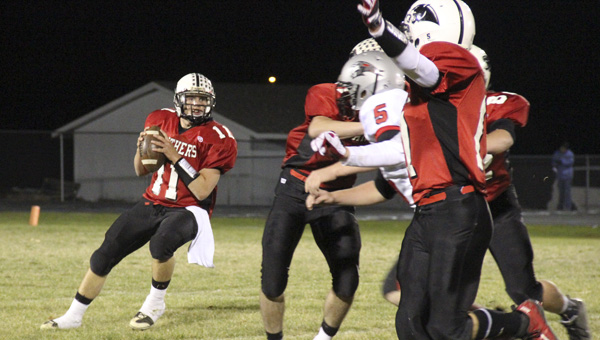 Sam Lundberg drops back to pass in the first half. Lundberg ran for two scores during the 42-6 rout of Kenyon-Wanamingo. -- Garrett Wampler

NEW RICHLAND — After a broken right foot held him out most of his senior season, New Richland-Hartland-Ellendale-Geneva running back Geoff Ramaker has returned with a vengeance.

In just his third game back, the senior ran for a remarkable 325 yards on 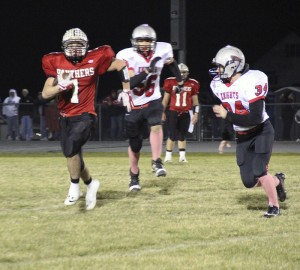 Geoff Ramaker carried the ball 31 times for 325 yards and four touchdowns in the Panthers opening round win over Kenyon-Wanamingo. He had 243 yards on 22 carries in the first half alone. -- Garrett Wampler

32 carries as the Panthers demolished the Kenyon-Wanamingo Knights 42-6 in the opening round of the Section 2AA football tournament.

“He brings a lot of speed and tenacity,” said Dan Stork, NRHEG’s head coach. “We love having him back. We sure missed him at the beginning of the year.”

NRHEG began the rout with an 11-play, 74-yard scoring drive capped off by Sam Lundberg barreling over two Knights defenders for a 12-yard touchdown run.

The Panthers quickly got the ball back after stripping Kenyon-Wanamingo quarterback Peder Sviggum on the Knights’ first play from scrimmage.

Ramaker took over on the ensuing possession utilizing three carries to travel 45 yards across the pylon.

After another short possession by the Knights, Ramaker went back to work. This time the senior took a pitch to the left and outran the defense for a 22-yard score.

NRHEG’s defense had little problem stopping the run, holding their foe to 56 yards rushing in the first half while recovering two fumbles and intercepting Sviggum once.

“We watched a lot of film on those guys,” Stork said. “We knew their quarterback was their best runner, and No. 1 we wanted to stop him from running the ball.

“Our guys played well up front and forced them to go to the air.”

There was little success through the air against the Panthers’ defense, as Casey Rosacker came up with two second-half interceptions.

Ramaker added another 50-yard touchdown scamper, and Lundberg concluded NRHEG’s scoring with a 2-yard run in the third quarter.

Next for the Panthers will be a rematch with the No. 1 seed in Section 2AA and the top-ranked team in Class AA — Waterville-Elysian-Morristown.

NRHEG dropped the first game 30-0 but only trailed 12-0 at halftime. This time they will have a healthy squad complete with Ramaker.

“I expect a battle,” Stork said. “Our kids wanted another shot at them after our loss to them. That is all we talked about. Hopefully we get to see them in the playoffs.

“Now we have that chance, and we better make the most of it.”