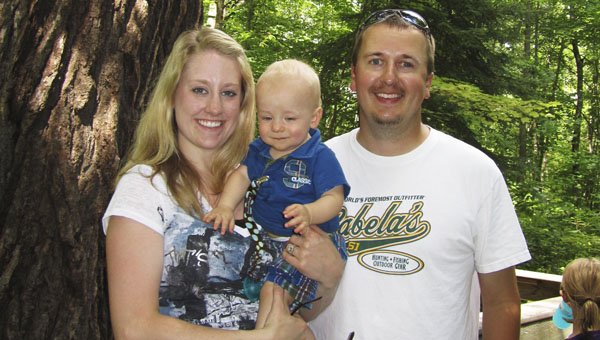 The Goodens pose for a photo recently. -- Submitted photo

ALDEN — For a 1-year-old, Luke Gooden of Alden is a pretty strong kid.

Luke was born almost three months premature and weighed just 2 1/2 pounds. Now 14-months-old, his height and weight is still lower than most kids his age. But even if he could comprehend the details, he likely wouldn’t worry. 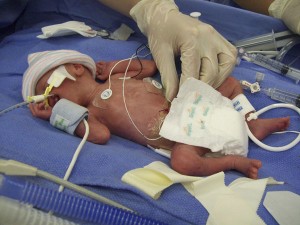 Luke Gooden was born at 28 weeks and is seen here while still in the hospital.

“He likes to scream and giggle; he’s a fun little guy,” said Megan Gooden, Luke’s mother. She said he acts normal and clearly is enjoying life.

Megan Gooden suffered from preclampsia, a condition of extremely high blood pressure that causes doctors to perform early C-sections. While most doctors like to wait until 30 weeks of gestation, Megan said, Luke entered the world at just 28 weeks.

“It came on so fast,” Megan said, and added she was at the doctor one day, was told to go home, and was back the next day for emergency surgery.

“I don’t think I comprehended any of it,” she said, and added 10 different doctors with differing opinions added to the confusion. She wasn’t sure what the outcome would be. Many children born premature develop lung problems, as they can’t breathe when born that young. As soon as Luke was born, he was placed in a breathing apparatus. Megan didn’t even get the chance to experience what most mothers do.

“It’s just hard because most mothers — you know — they get to hold their babies instantly,” Megan said.

Megan didn’t get to hold Luke until he was 10 days old. For nearly three months, she stayed at the Ronald McDonald house, next door to St. Marys Hospital in Rochester. But perhaps Luke has made a habit of doing things early, as he went home after 11 weeks, one week before what would have been his due date. During that time, she said there was more confusion about how Luke would grow. 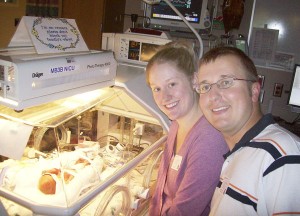 This is the first family photo for the Goodens of Alden.

“It got really depressing,” she said.

However, several things helped Megan during the ordeal. Finding comfort with people familiar to the situation was one of them.

“You do find comfort in talking to other people who are in the same situation as you,” she said and added three other mothers were dealing with the same issue at that time. The other help was the March of Dimes organization, a nonprofit agency that researches the health of mothers and they’re babies.

“Luke is the way he is because of the March of Dimes. … It’s just a great organization,” she said, and mentioned how the staff members truly care about the individuals. “These people, they’ve never met Luke, but I can tell how much they care.”

Megan knows many other families aren’t as fortunate with the same situation, which is why she is so proud of the March of Dimes. The March of Dimes will hold its Jail and Bail in Austin from 10 a.m. to 1 p.m. City officials and other local citizens will be “mock arrested” and housed at Torge’s Live and the Holiday Inn in Austin. To get out, they will have to donate to the March of Dimes.

That’s something that will make Megan proud, as she hopes more research can find a cure for preclampsia, not just so she can find some solace with future pregnancies, but so other mothers can, too.

“We feel so blessed with Luke,” Megan said and added many other premature babies don’t make it, especially boys.

“You prepare for the worst but you are still kind of hoping for the best,” Megan said about dealing with premature birth.

And it appears that the Goodens got the best, as Luke is happy and now trying to talk and walk.

Furthermore, she said the doctors aren’t worried about any health issues with Luke anymore. Luke probably isn’t, either.