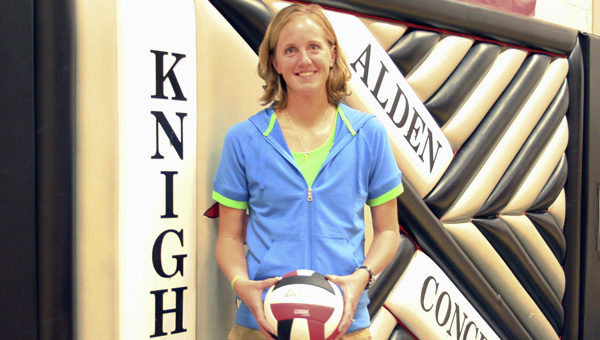 ALDEN — Often great collegiate athletes make their marks on universities’ athletic programs and then move on to the next step in their lives.

New players filter in and the programs must continue without them.

On occasion, some athletes’ journeys do not go unnoticed. Melissa Wasmoen is one of those athletes.

Her time on the volleyball courts at the University of Wisconsin, River Falls, is being recognized on Friday with an induction into the university’s athletic hall of fame.

“I’m very excited because my family is going to be there and a lot of my former teammates,” said Wasmoen, who is currently in her fifth year as a physical education and health teacher at Alden-Conger School. “It is very special and I am very honored.”

Wasmoen torched the record books during her tenure at River Falls. Between 1997 and 2000, she managed to set herself in the top 10 in seven statistical categories.

The former two-time American Volleyball Coaches Association All-American is tops in school history with a .329 kill percentage and has the highest kill percentage in a single season (.371) to go along with the most kills in a season (578) in 2000.

“I wouldn’t have been able to do any of this without my teammates,” Wasmoen said. “They are a huge part of my success and I really wish they could all be inducted, too, as a team.”

On Friday, Wasmoen will attend a banquet at the university, receive a plaque with her accomplishments engraved upon it and give a speech.

Her head coach at River Falls, Patti Ford, will be in attendance for the event. Ford remembers Wasmoen as a competitor and true team player.

“Melissa was an outstanding student-athlete at the University of Wisconsin, River Falls,” Ford said. “She has demonstrated strong leadership in academics, athletics and service to others.

“Athletically, Melissa was a fierce competitor who obtained the most from her abilities and strived beyond those abilities. As a four-year member, Melissa has played a vital role, not in the value of games played, but in the essence of a true team player.”

On Saturday, she will also be presented to the crowd during halftime of the football game, participate in the homecoming parade and hopefully she will be able to sneak in the volleyball match.

Wasmoen wasn’t always sure she would play volleyball for the Falcons.

When she was in high school she was a three- sport athlete for the Alden-Conger Knights — playing volleyball, basketball and softball.

While away at college the choice was to either play volleyball or basketball. She settled on volleyball but almost came to regret that decision.

“When I first started it was crazy,” Wasmoen said. “I went to the first practice and that night I called my dad and asked him to come and get me. He was like ‘You know what, try it one more day. If tomorrow you feel the same way we’ll think about it.’ It’s the best choice I made to stay there.”

She excelled both in the classroom and on the court for the Falcons, garnering scholar athlete awards and academic all-American honors. On the court, Wasmoen started all for years under Ford.

“She was a very good coach I learned so many new strategies and ideas from her,” Wasmoen said. “She pushed you to do what you could.”

Since her graduation from River Falls with a double major in physical education and health, Wasmoen has spread her knowledge of the game to others as a varsity coach.

Wasmoen began her coaching career in Baldwin-Woodville, Wis., where she coached the freshmen for a year and then varsity for a year before returning to southern Minnesota.

In 2006, she took the helm as head coach of the Albert Lea Tigers. During her one year in Albert Lea Wasmoen was named the Tribune’s Coach-of-the-Year. Her most recent stint was in Alden-Conger where she coached the varsity for three years, before she took time off for her third child.

“Melissa was an excellent leader and role model for all to follow,” Ford said. “She was a very disciplined, intelligent and conscientious student-athlete who balanced her athletic and academic interests with great success.”

“Her leadership, talent and scholarship enhanced the university and her hard work and dedication to Falcon volleyball is one many strive to achieve today in our program.”