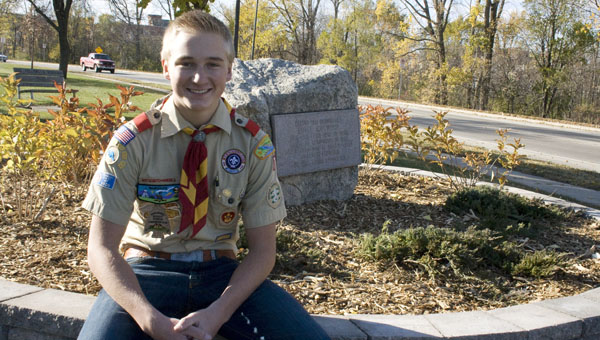 Sixteen-year-old Zach Lind sits in front of the revamped Eddie Cochran memorial at the corner of Front Street and Frank Avenue on Friday. Lind worked on improving the corner for his Eagle Scout project. -- Sarah Stultz/Albert Lea Tribune

A local corner in Albert Lea has undergone some major improvements thanks to one soon-to-be Eagle Scout.

Sixteen-year-old Zach Lind, a sophomore at Albert Lea High School, last week spruced up the corner of Front Street and Frank Avenue next to the Albert Lea Aquatic Center.

The corner houses a memorial to rock ’n’ roll musician Eddie Cochran that previously had been overgrown with weeds.

Lind, who was looking for an Eagle Scout project, said he figured it was a perfect opportunity to make the corner less of an eyesore.

It’s taken him more than 100 hours —including planning — to complete.

He said he started planning the project in May of 2010 and worked with the city of Albert Lea to organize it.

City workers moved the memorial — basically a large rock with a plaque on it — aside, and Lind first built a pedestal to place it on. Then he built a circular stone retaining wall about 20 inches high around the pedestal and then filled it in with dirt. He topped it off with some fresh plants and mulch.

“We really appreciate his efforts on this project,” said Albert Lea Parks and Recreation Director Jay Hutchison. “It really helps beautify that spot and call attention to the marker there.”

Lind, the son of Doug and Leota Lind, said the project was made possible through private donations as well as a donation from the local Eagles Club.

With the help of his family, friends and fellow Scouts, the project was completed during fall break last week — a span of about four days.

He thanked his father for encouraging him during the project, along with Dick Rockin with Plaza Landscaping and those people who helped him actually construct the project.

Lind said this was the last major step for him to complete to get his Eagle Scout, aside from one merit badge.

He hopes to have his Eagle Scout Award ceremony in December.