Arlene A. Groskreutz, 82, of Wells, who lost her battle with Alzheimer’s and Parkinson’s disease; died Wednesday, Oct. 12, 2011, at St. John’s Lutheran Home in Albert Lea, where she had resided for the past five years. Funeral Services will be at 10:30 a.m. Saturday at Freeborn Congregational United Church of Christ Church in Freeborn. Visitation will be from 4 to 7 p.m. Friday at Bruss-Heitner Funeral Home in Wells. Visitation will continue one hour prior to the service at the church on Saturday. The Rev. Cherie Daniel will officiate and burial will be in the Freeborn Cemetery. Bruss-Heitner Funeral Home of Wells is in charge of arrangements. 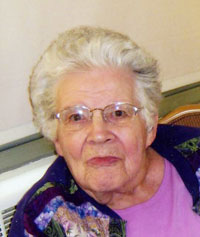 Arlene Amelia Groskreutz was born Aug. 19, 1929, the youngest child of Jerome and Mabel (Rasmussen) Young in rural Freeborn. She attended country school and graduated from Freeborn High School, the class of 1947. After high school, she worked in Albert Lea at Munsingwear prior to her marriage to Norbert Groskreutz on March 10, 1950, in Wells. The couple lived in Freeborn until moving to the Matz Mink farm, where Arlene cooked delicious meals for the mink farm workers. She was an excellent cook, who provided her family with baked goodies such as donuts on Saturdays, homemade buns, turtle candy and pies. Arlene worked for many years at Banquet Foods, prior to starting Norlene’s Country Crafts in Wells. Her hobbies were making rugs and crafts with Norbert along with selling at the local craft shows. Arlene was a member of the Freeborn Congregational U.C.C Church in Freeborn.

She is survived by her husband, Norbert, of Wells; one daughter, Cathy (Larry) Dostal, of Owatonna; two grandchildren: Michael Dostal of Minnetonka and Michelle (Ben) Sunde of Blooming Prairie; two great-grandchildren: Isabelle and Anika Sunde of Blooming Prairie; one sister, Martha Ignaszewski, of Wells; one brother, Elmer (Elvira) Young, of Freeborn; sister-in-law and brothers-in-law: Arlean (Curtis) Pritchard of Owatonna, Larry Kendrick of Winona and Fritz Kendrick of Richfield; along with numerous nieces and nephews and their families.

Arlene was preceded in death by her parents, one brother, Melvin Young and one sister, Florence Johannsen.