A celebration of life service for Betty J. Goodemann, of Albert Lea, will be held at 11 a.m. Thursday at Bonnerup Funeral Service, Albert Lea. The Rev. George Marin will officiate. Interment will be in Hillcrest Cemetery. Friends may visit with family one hour before the service at the funeral home. 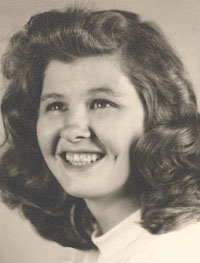 She was born on April 4, 1929, in Glenville, the daughter of Ernest and Hannah (Granum) Kabrud. She attended Glenville Schools, and then moved to work in Minneapolis for a short time.

Betty married Eldon Goodemann and they made their home in the Glenville and Albert Lea area. To this union five children were born: Deb, Lonnie, Theresa, Jack and Lance. They were later divorced.

Betty had worked for Land O’ Lakes, Weyerhaeuser, and then at the Roadrunner for more than 10 years before retiring in 1990. She was a member of the American Legion and VFW auxiliaries. Betty enjoyed bowling, photography (you could always catch her with a camera in her hand), cleaning and repairing clocks and watches, going to rummage sales and scratch-offs. Her most treasured times were those spent with family and friends, and rarely missed coffee hour with her sisters at Hy-Vee, delivering the Albert Lea Tribune to her children and bringing “treats” to the girls at the Crest office.

She was preceded in death by her parents; son-in-law, Shawn Harriman, sisters: June Haugerud and her husband, Orian and Marion Hintz and her husband, Tom; brothers-in-law: Richard McGuire, Gordon Becker and Bill Thompson, who died yesterday.