Bulldogs all smiles after sweep 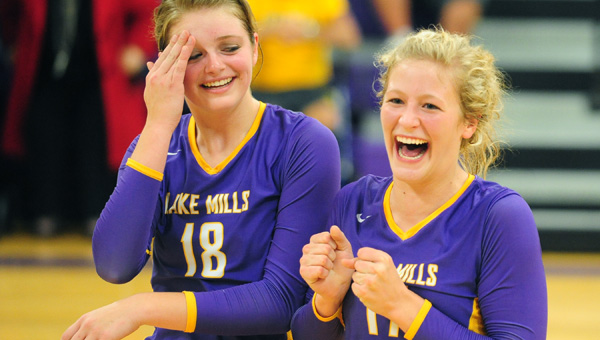 He changed his mind Tuesday — for one game at least.

The Bulldogs dominated offensively and handed West Fork, a team looking for its 30th win of the season, a crushing defeat in the Class 2A Region 6 quarterfinals.

“We were an A tonight,” Boehmer said. “Certainly that analogy works but when it’s tournament time you’re only as good as our last match.”

Senior hitters Josie Brackey and Shelby Kuper led a fast-paced offense and met little resistance from West Fork on the left side of the court. Brackey led the team with 21 kills in 30 attempts, and Kuper added eight kills.

Boehmer said he was pleased with the team’s tempo and that all five hitters kept West Fork on their heels. Brackey scored most of her kills crosscourt while Kuper went down the line for hers.

After Lake Mills’ Kelci Larson led off the match with a service error, Brackey and the Bulldogs went on a tear. The senior, who has recorded 376 kills this season, notched five kills over the first seven points as the Bulldogs went up 7-3 and eventually 14-6. Back-to-back kills by Kuper and Catherine Adams gave the Bulldogs the 25-12 win.

By Game 3, the Bulldogs had beat up West Fork mentally and the Warhawks played with little enthusiasm in a 25-13 loss.

“I liked that our girls were still running, playing hard and having fun,” Boehmer said. “It was one of those matches where they were almost disappointed it was over.

“Of course they were happy they won but they wanted to play and keep playing. The kids were fired up and enthusiastic and that comes from playing together now for a full year.”

The Bulldogs are one game away from the regional finals and play at 7 p.m. Friday against Forest City (27-12). Lake Mills has beaten the Indians three times this season.