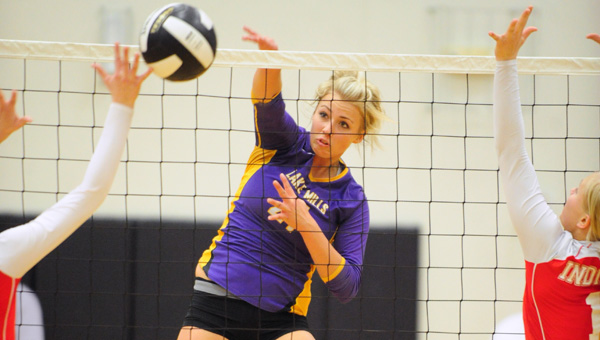 A perfect regular season. A ninth consecutive North Iowa Conference title. Sixty-four straight set wins to start the year. But on Friday the Bulldogs had only one number in mind: three.

Lake Mills dropped a set to Forest City but hung on to win 3-1 in the Class 2A Region 6 semifinals in Manly, Iowa.

Lake Mills opened the semifinals match with one of its hottest starts of the season. Carlie Christianson and Josie Brackey led the Bulldogs to a 21-6 lead over Forest City, which increased to 23-8 after consecutive kills by Brackey. But the Indians didn’t disappear and scored eight of the game’s final 10 points to gain momentum despite a 25-16 loss.

Forest City used that momentum in Game 2, and after falling behind 9-4 went on an 11-5 run, which included seven straight points to pull ahead 20-13.

Then the Bulldogs flipped the script.

Unproductive for most of the set, Brackey came alive late and notched six consecutive kills to tie the game at 23-23. The Indians went on to score the final two points but unlike after the opening set, the Bulldogs had all the momentum heading into Game 3.

“Sometimes it’s not about winning the set but about having momentum,” Boehmer said. “Forest City did the same thing to us in Set. 1. Volleyball is momentum.”

After trading points to start Game 3, the Bulldogs and Indians were tied at 12-12. Consecutive kills from Brackey and Shelby Kuper gave the Bulldogs a 14-12 lead, and after the Indians pulled within 14-13, senior setter Morgan Fjelstad scored a kill and served the final 10 points for the 25-13 win.

“We tried to trip her up,” Fjelstad said. “We know that’s their strong hitter and they always try to go to her so we tried to take her out and make her more tired.”

The Bulldogs had little trouble in Game 4 and built a 9-2 lead after three straight ace serves by Kelci Larson. Brackey finished the Indians with three consecutive kills for the 25-16 win.

Fjelstad said the Bulldogs didn’t panic after dropping the second set because they’re familiar with Forest City and had been in the same situation earlier this season.

“This was our fourth time playing Forest City so we know what they do,” Fjelstad said. “In the second set we got a little down but knew we wanted to keep going and needed to step it up.”

Throughout the year, Boehmer has feared how his team, who’s only lost three of 102 sets this season, will respond to a set loss. He was pleased Friday.

“So far I like our girls’ resiliency to come back after losing a set you just certainly don’t like to see that,” Boehmer said. “But again we got by.”

“We’re pretty confident considering we’re second in the state,” Fjelstad said. “We know we’ve got another big game coming up but we really want to get back to that state tournament so we’re practicing hard and focusing on (Sumner-Fredricksburg).”