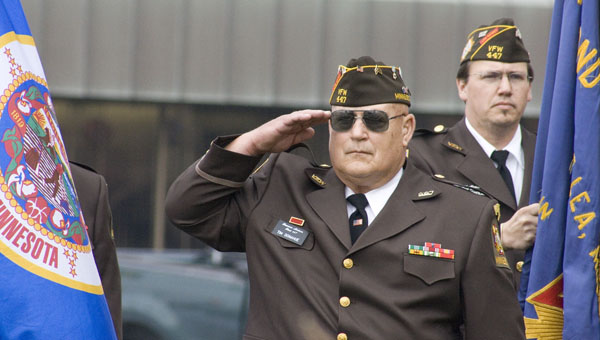 Members of the Veterans of Foreign Wars Honor Guard pause to salute Tuesday during a special program at the Freeborn County Courthouse. -- Sarah Stultz/Albert Lea Tribune

Company F of the 4th Minnesota Volunteer Infantry Regiment is the Army unit formed at the onset of the Civil with men from Freeborn County. On the 150th anniversary of its formation, the unit received special honors Tuesday with a ceremony on the west lawn of the historic Freeborn County Courthouse and inside the first floor. 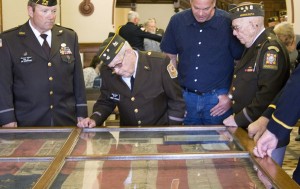 Members of the VFW Post 447 and Leo Carey American Legion Post 56 look at the Company F 4th Minnesota Volunteer Infantry Regiment flag Tuesday after a special ceremony in the first floor of the historic Freeborn County Courthouse. The ceremony was held in recognition of the 150th anniversary of the mustering of the company during the Civil War.

During the ceremony, officials shared the history of Company F and highlighted a flag that hung over their battles.

The flag is on display in the first floor of the historic courthouse.

“Today, on the 150th anniversary of the mustering in of Company F of the 4th Minnesota Regiment, we gather near their battle flag, constructed by the Ladies of Freeborn County, carried through the trials and tribulations of war, of friendships gained and lives lost, and we honor the courageous role that these men had in the preservation of the nation in its darkest hour,” said Freeborn County Commissioner Christopher Shoff. 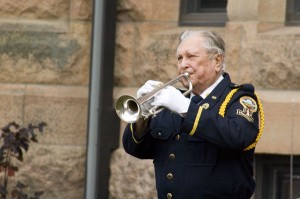 Legionnaire Bob Miller plays “Taps” on a bugle Tuesday outside of the Freeborn County Courthouse.

Shoff said the company participated in several key battles during the Civil War, including the capture of Vicksburg, Miss., and Gen. William T. Sherman’s March to the Sea, among others.

Freeborn County Administrator John Kluever said three officers and 58 enlisted men in the 4th Minnesota Volunteer Regiment were killed during the war, and three other officers and 175 other enlisted men died of disease.

After sharing a brief history of the company and talking about the flag that went through its battles, people took the time to look closer at the flag, which is in a glass case. Each of the nine battles the company fought in are included on the flag. 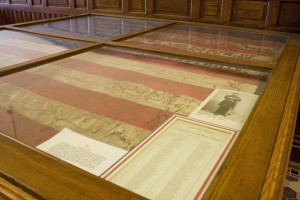 The Company F flag is on display in the first floor of the historic Freeborn County Courthouse.

The ceremony began outside the courthouse with a salute by members of the Veterans of Foreign Wars Post 447 honor guard and the Leo Carey American Legion Post 56 firing squad at the monument on the west lawn.

After the organization of the Company F 4th Minnesota Volunteer Infantry Regiment of the U.S. Army in 1861, the Ladies of Freeborn County manufactured a special Company F flag for $70. It flew in the air over all the conflicts that the regiment took part in.

It includes the names of the nine battles the company fought in.

At the end of the Civil War, when the company was discharged, the flag was entrusted to Sgt. Enoch Croy, who guarded it for two years, before turning it over to the Freeborn County treasurer for safekeeping. It has been with Freeborn County ever since. 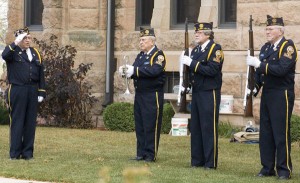 It is on display in a glass case on the first floor of the historic courthouse.

• The company participated in Gen. William T. Sherman’s March to the Sea.