Considerations for a wine cellar 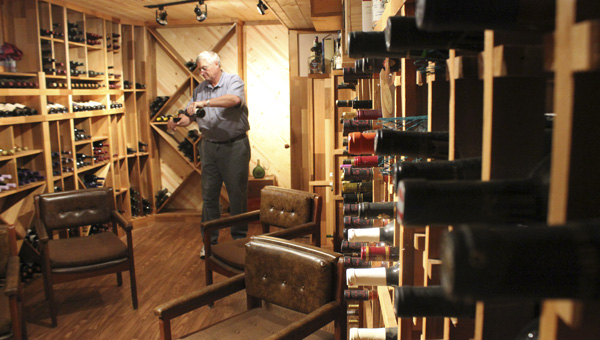 Standing in the wine cellar of his rural Clarks Grove home, Jim Hanson pours a bottle of Marietta Cellars old vine red, a Zinfandel blend. It seemed sharp at first but smoothed out with exposure to oxygen. -- Tim Engstrom/Albert Lea Tribune

Jim Hanson of rural Clarks Grove knows all about storing wine. He built his own wine cellar.

Hanson’s wine cellar didn’t come easy, however. He had an odd-shaped room in his basement, bits and pieces of 105 cases of wine and some steel shelving. He first figured he would store the wine on the shelving and that would be it.

His brother, a cabinet maker, got him to change his mind.

“We grew up in the lumber business. You have to do wooden shelving,” he told him.

The Hanson family took on the project in 2001. Jim’s wife and sister-in-law painted the walls of the 10-foot by 21-foot room. He and his brothers built racks from redwood and cedar. Some surfaces, such as the ceiling and back wall, have pine tongue-and-groove covering. The ceiling features track lighting and is controlled with a dimmer switch.

The cellar can hold up to 2,200 bottles, though Jim only has 1,500 now. The optimum temperature for a wine cellar is 55 degrees. His gets down to 44 degrees in the winter and up to 70 in the summer.

Hanson is glad he didn’t go with steel shelving.

“Wood has character like wine,” he said. “Steel doesn’t fit the aesthetics.”

• Build racks for cases on one side and racks for onesies and twosies on the other.
• Make sure the bottles lie horizontally so the corks stay wet.
• Don’t stock too many whites because they don’t age as well as reds.
• Keep the wines out of direct light, as light is the enemy of wine.
• Keep a small refrigerator for chilling whites.
• Size it to your intended use. Hanson says he made his too big and has to shoehorn guests to come drink his wines (without too much protest). He gives many bottles away as gifts, which he says is rather handy when heading out the door to visit friends.
• Have a cabinet for glasses.
• Leave room for chairs, a table and a CD player to entertain guests either in the cellar or just outside the door.

As seen in Southern Minnesota Magazine.