Could Albert Lea get a Maid-Rite? 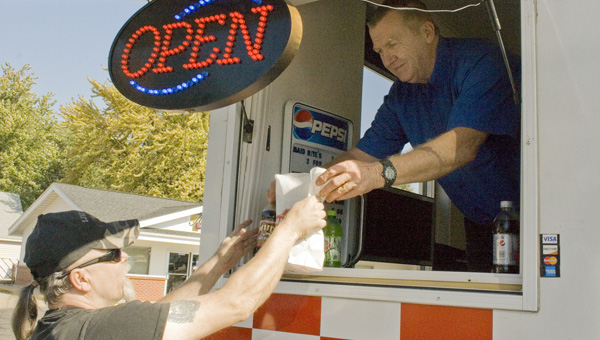 Serving the loose-meat ground-beef sandwiches out of a temporary food wagon in Albert Lea since the last week in August, Sanford said he’s seen a demand for the company’s product.

“People want the sandwich back, and I want to be the one to bring it back,” he said. “I know there’s a demand for it here.”

To make sure, he’s testing the market each Tuesday and Thursday for the next year in the A-Best Sew & Vac parking lot at the corner of Garfield Avenue and Main Street. He said he plans to be out each week, even through the winter, as weather permits.

On Thursday, the food wagon — known as the “Lunch Box” — was buzzing with activity during the lunch hour.

“The taste, you can’t make it yourself, no matter how hard you try,” said Arlene Vanek of Glenville.

She said though Maid-Rite sandwiches may appear simple, there’s nothing quite like them around.

More like a sloppy joe than a hamburger — minus the sauce — the ground-beef sandwiches are mixed with a special trademark seasoning and then can be served with ketchup, mustard, onions or pickles. Cheese can also be added.

“I know they’re good,” said customer James Callahan of why he came to pick up a sandwich.

For many Albert Leans, however, it’s more than just the taste of the sandwiches that draws them to come back time and time again. The sandwiches also evoke memories of a bygone era in Albert Lea, when the company operated a franchise at 220 E. William St. from the late 1940s until the late 1960s.

Customers at the stand Thursday recalled going to the restaurant when they were younger and getting sandwiches for as cheap as a nickel or a dime apiece.

“We’ve got something here that’s nostalgic,” Sanford said, noting that the company opened its first store in Muscatine, Iowa, in 1926.

There’s been rumors of the franchise opening a new location in Albert Lea for several years, most recently in 2008 when there was talk that the company was looking at the former Starbucks building on East Main Street. The building was ultimately purchased by Kentucky Fried Chicken.

Sanford said recently he’s heard about six locations in town that are interested in bringing in Maid-Rite. Though he hasn’t pinpointed an exact location, he hopes to pair up right next to an existing business and have a small, old-fashioned 1950s-style diner with a basic menu — homestyle Maid-Rites and chips and then also soup in the winter.

He wants to pair up with an existing business so he can compliment the business and vice versa.

He noted while he’s also testing the market in Owatonna and Red Wing, it is his goal to first bring the company to Albert Lea.

In the meantime, he and his wife have been busy traveling to 15 county fairs this summer, and they hope to make it into the state fair in 2012.