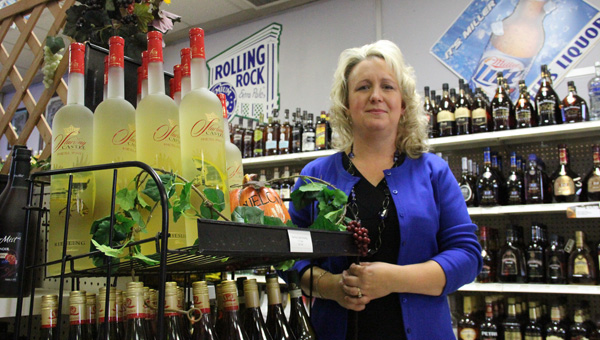 Knowing her customers is the key to maintaining a good business.

Angie Stickfort and her husband of 24 years, Craig, own Cheers Liquor in Albert Lea and Austin. She said it’s important that she knows her customers so she can stock the products they enjoy.

Stickfort also credits her staff in both locations for their hard work and dedication. She and her husband have owned the Albert Lea location for seven years and bought the former Beer Depot in Austin in May. Stickfort said she’s dividing her time between the two stores.

Stickfort has been a bookkeeper for many years. She worked at First Lutheran Church for 15 years before leaving to help her husband with bookkeeping for the Indy Lube stores they owned.

“It wasn’t my thing to be home all the time,” Stickfort said.

She enjoys being around others and meeting customers. She’s liking her position now because she keeps track of the books, which she’s always enjoyed, but she also performs many other tasks and works alongside her employees.

As an owner, she doesn’t have many days off unless she purposely plans a trip. Most vendors come on Mondays, and on Sundays she and Craig do the ordering.

“When you own something you don’t have a lot of days off,” Stickfort said with a laugh.

Stickfort got her accounting degree at Riverland Community College and grew up near Conger. She lives on the same farm she grew up on and jokes that she’s only moved 100 feet in her life, because she moved from her childhood home to the home she and her husband built on the same land. She always knew she and Craig would be owners of something someday because of their personalities.

“I thought we would be business owners because my husband is intelligent and ambitious,” Stickfort said.

For now they don’t plan to expand or own more stores because it’s so important to Stickfort to know her customers and be in the stores as much as she can.

“To get farther away is too far to do a good job,” Stickfort said.

For more stories on local women in business check out the special section inside today’s paper.