Riverland Community College wasn’t Brittany Lopez’s first choice. She wanted to go to Kaplan University, but the young mother of three wasn’t accepted there. She didn’t let that deter her, as she decided to go into the medical secretary program at Riverland. With about $1,700 in tuition this semester, most of her college costs are covered by grants.

“It was what I could afford,” Lopez said.

Riverland is what many area students can afford, as it’s a well-known stepping stone for completing general education credits. Yet Riverland, like all U.S. public colleges and universities, faces financial issues — from decreasing state funding and competitiveness — as students’ schooling choices increase. 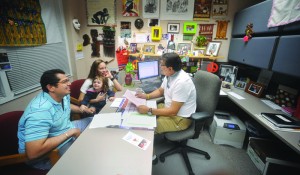 While Riverland officials have offset decreasing funding with increasing tuition in the past, they’re looking for other funding options, whether it’s partnerships with private organizations or more state and federal grants.

“If our traditional means of support are drying up, then we have to look for alternative sources of support,” said Riverland president Terry Leas.

Ten years ago, Riverland got about two-thirds of its funding through state aid. Today, that number is about 45 percent, due to increasing cuts in higher education funding. Riverland’s aid was cut by about $2.5 million in the past two years alone, more than 20 percent of its previous funding.

Riverland weathered the state Legislature’s financial storms for the past 12 years by increasing tuition for students by a small percentage each year, usually whatever percentage the Minnesota State Colleges and Universities Board of Directors recommends. The MnSCU board normally recommends a 3 to 5 percent tuition increase each year, but each college can set their own tuition increases within reason. In some cases, like from 2003 to 2006, Riverland officials hiked tuition up by more than 10 percent. Riverland tuition usually outpaced the Consumer Price Index rates, as inflation went up by two to four percent annually since 1999.

Those increases add up, as Riverland students paid about $65 per credit in 1999 compared to about $159 a credit this year.

“Not all that has gone on students’ backs,” said Brad Doss, Riverland’s Chief Financial Officer.

Riverland officials cut 14 jobs out of more than 600 this year to stem a $1 million slash from the state, about 10 percent of Riverland’s state aid. In 2010, they cut nine positions, including a dean of students and three receptionists, to save about $800,000. Riverland also cut several programs over several years and about 25 class sections from its schedule this year, which Doss said saved about $100,000.

That’s where school administrators come into play. Riverland officials restructured various student services into one department to ease student wait times and create a focus on student retention. Instead of going to three or four advisers for admissions, registration, financial aid and counseling, students go to one.

“This was almost a year-long project,” said Danielle Heiny, Retention and Human Services Director. “We were kind of siloed out with all those divisions.”

Heiny is no stranger to restructuring. A former director of admissions, Heiny has worn many hats at Riverland in recent years, from Student Life Director to head of Diversity and Multiculturalism. Her focus this year is finding ways to retain students after Riverland officials found only 66 percent of first-year students who weren’t transferring or completing a one-year degree came back.

“We were feeling students were not being successful academically,” Heiny said.

These restructuring methods, along with initiatives like Sustain Riverland, stem from best practice studies Riverland officials completed over the past several years. By becoming more efficient, Riverland officials hope to increase the college’s reputation and keep students coming to learn.

“We wanted to restructure to serve a greater number of learners (to replace) a shrinking workforce, but we had to preserve quality, efficiency and effectiveness,” Leas said.

Restructuring doesn’t pay the bills in the long term, which is why Riverland officials — like many colleges and universities — are turning to more partnerships and grants. Grants like the $280,000 Riverland received to start a Minnesota Young Student Parent Support Initiative, which will help young parents like Lopez offset college costs. Grants like a $1.3 million boost to health care programs Riverland got this week. Grants like the one US. Senators Amy Klobuchar and Al Franken and Representative Tim Walz secured for three colleges including Riverland’s Albert Lea campus, splitting $12.6 million between the schools.

In addition, Riverland is partnering with other MnSCU colleges and universities to provide services. A partnership with Minnesota State University, Mankato, could bring extra resources to the Owatonna campus and Riverland officials are in the preliminary stages of aligning Riverland’s nursing department with Winona State University’s nursing program. Riverland has also partnered with the Hormel Foundation in recent years to fund the Be Your Best college prep course and the Cycles for Success scholarship program.

“We will need to look strategically at opportunities with private partners,” University of Minnesota President Eric Kaler said Tuesday, speaking on higher education solutions to decreased state funding. “We need to find a way to replace those kinds of levels of support.”

To that end, Riverland officials want to slow tuition percentage increases. How successful Riverland is at stemming tuition inflation will depend on state funding, however. Several states like Washington have cut higher education funding by as much as 30 percent. If Minnesota’s lawmakers follow suit, all bets are off.

“If we get something like that, I don’t know if we’d be able to protect the students from the effects of something that drastic,” Leas said.

For now, students like Noah Weis are content to go to Riverland. Weis is in his second year at Riverland and hopes to transfer to a four-year school for an arts or graphic design degree. He works around 30 hours a week to pay about $1,200 this semester for seven credits. He’s glad for the opportunity to get his general education credits done at Riverland.

“It gives me a little time to try and save money,” he said.