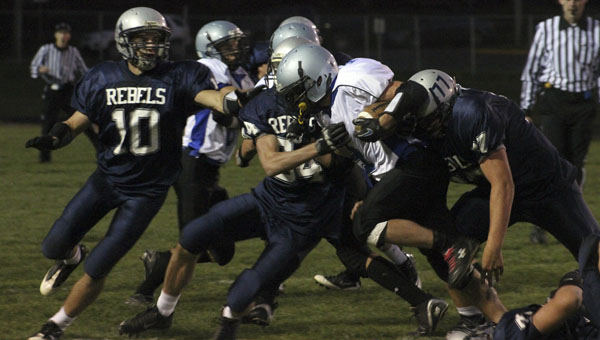 Many players had tears in their eyes, while others nursed injuries with ice packs.

But they all managed to gather themselves up to break out of the team huddle one last time.

The Rebels (1-4) had just suffered a 35-0 defeat at the hands of Martin County West (4-1). A game in which the greatest weapon for the Mavericks was the Rebels offense.

Martin County West only managed one touchdown on offense, the four other scores came on defense or special teams.

“At halftime we only gave up 63 total yards, including two-yards rushing. Defensively we played a great game,” USC head coach Brad Huse said. “We had a great game plan. It’s just offensively we shot ourselves too many times in the foot.”

The Mavericks defense scored on two interception returns and a fumble recovery in the endzone. Their special teams was able to block a punt and return the ball for a touchdown on the play.

After a scoreless first quarter, sophomore Travis Brown threw his first of three interceptions of the night on a ball tipped into the air by Kyle Bauman. The Mavericks Tyler Sinn opted to run the ball out from two yards deep in the endzone and he was off to the races, scoring on a 102-yard interception return. 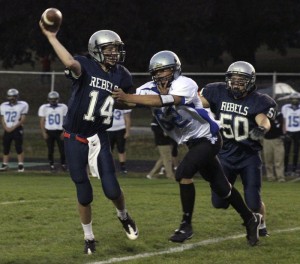 Sophomore quarterback Travis Brown hurries to get rid of the ball. Brown had a night to forget completing 5-of-21 passes for 44 yards and three interceptions. -- Garrett Wampler/Albert Lea Tribune

The Rebels struggled all night to get their offense moving. They finished with 91 total yards of offense including 39 yards rushing against MCW.

Two possessions later the Mavericks blocked a Walker Linde punt and Tyson Schuder returned the ball 48 yards for the score. Bryan Andrews would tack on another score before halftime on another interception return, this one 16 yards.

A bright spot for the Rebels was the defensive play of sophomore Dylan Herman. He was able to pick-off two Jake Faber passes in the first half, holding the Maverick offense scoreless.

“He does a nice job for us,” Huse said. “He’s not the quickest guy out there but he knows where to be.”

Faber would hook up with Austin Krumwiede on a 30-yard touchdown reception for the games lone offensive barrage. Andrews tacked on the games final points after recovering a Rebel botched snap in the endzone for the score.

Cole Stencel returned to the Rebels offense for a series in the second quarter but left the game after re-injuring the same shoulder that he separated earlier this season and had surgery on to repair a torn labrum last spring. Huse said it is hard to say if he’ll be done for the year.

“The guys that got hurt tonight we’ll have to see how they respond this week,” Huse said. “(Tyler) Lackey had a hip pointer and Linde a bruised his knee, a contusion. So we’ll wrap him up and take it day by day.”

One bright spot for the Rebels is that starting running back Chris Melby will be back playing both ways next week after a hip flexor limited him to only the defensive side of the ball Friday night.

USC will travel to Maple River next week with hopes of getting players healthy and returning to form before the playoffs. If they can’t get healthy Huse will look to the younger players to fill the void.

“Last week we had six sophomores out there,” he said. “It’s a growing process every week. We have to find a new guy to step in and do that. We’ll go back to basics and regroup.”