The memorial service for Delores J. Stanley, of Albert Lea, will be at 1 p.m. Wednesday at the United Methodist Church, Albert Lea. The Rev. Ron Nicholas will officiate. Interment will be in Graceland Cemetery. Visitation with her family will be one hour before the service at the church. Memorial in lieu of flowers are preferred. 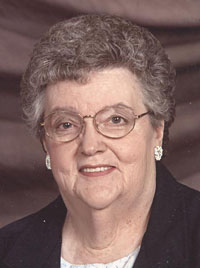 Delores was born June 10, 1936, at Webster, to Clarence A. and Evelyn E. (Heath) Bailey. Delores married Donald J. Stanley on Dec. 27, 1958, at Nashua, Iowa. Since her marriage she has been an Albert Lea resident. Delores worked as a registered nurse and director of nursing for 50 years. She was employed by Naeve Hospital, Wilson’s Foods and Good Samaritan Society. Delores was a member of the United Methodist Church. She enjoyed reading, gardening, cooking, playing cards, board games and spending time with her cat Maize.

Delores also enjoyed watching NASCAR racing, singing and playing piano and organ. She especially enjoyed spending time with her grandchildren and was a devoted wife, mother, grandmother and caregiver. Delores inspired her family in all of their endeavors and helped cheer their successes.

Delores is survived by her husband, Donald Stanley of Albert Lea; two sons: Dan Stanley and his wife Karen of Prior Lake and Duane Stanley of Hollandale; grandchildren: Travis Stanley, Kristin Stanley and Caitlyn Stanley; sister, Kathy Schoon and her husband Ben of Alden; sisters-in-law: Shirley Stanley of Apple Valley and Shirley Hovland and her husband Melvin of Hollandale; brother-in-law, Melvin Guerts of Lynville, Iowa; and numerous nieces and nephews and cousins and their families.