The funeral service for Dennis L. Smith, of Albert Lea, will be held at 10 a.m. Saturday at St. Theodore Catholic Church. The Rev. John Traufler and Deacon Mike Ellis will officiate. Interment will be in St. Theodore Catholic Cemetery. Military honors will be accorded by Albert Lea veteran’s organizations. Visitation will be from 4 to 7 Friday at Bonnerup Funeral Service, Albert Lea, and will continue one hour before the service at the church. 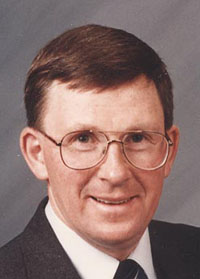 He graduated from Albert Lea High School and then proudly served our country in the U.S. Navy during the Vietnam War. He served from August of 1970 until his honorable discharge from the reserves in April of 1976. Dennis was united in marriage to Keiko Hook on Aug. 16, 1975, in San Diego, Calif. He completed training in electronics at Dunwoody Institute in Minneapolis and then worked in the service department at JC Penney for a short time. In 1976, Dennis and Keiko made Albert Lea their home, and Dennis worked at Naeve Hospital in the biomedical engineering department for 26 1/2 years. Dennis was a member of the St. Theodore Catholic Church where he had ushered for many years. He was also a member of the VFW and the American Legion.

An avid sports fan, he never missed his sons ‘sporting events and enjoyed keeping up with the Minnesota Gophers and the Vikings. His giving and caring nature made his volunteer work in the community very rewarding for him. He especially enjoyed volunteering at the YMCA, where he was working for the betterment of our communities youth. His hobby and passion were his horses and spending the days with his dog “Eyes.”

Dennis will be greatly missed by his wife, Keiko, of Albert Lea; son, Thomas Smith, and his wife, Whitney, of Grafton, Wis.; son, Benjamin Smith, and his wife, Mary, and their daughters: Madelyn and Grace, of Warminster, Pa.; brothers: Charles Smith and his wife, Carol, of Albert Lea, James Smith of Austin and Raymond Smith of Missouri; father-in-law and mother-in-law, Vernon and Hisae Hook of San Diego, Calif.; sisters -in-law: Gloria Smith, Yoshiko Suzuki of Japan,and Suzuko “Susie” Ellis and her husband, Rex, of Spring Valley, Calif.; aunt, Effie Neist, of Albert Lea; and several nieces, nephews and cousins.

He was preceded in death by his parents; sister, Linda Smith; brother, Patrick Smith; and sister-in-law, Diann Smith.

Dennis will be remembered for always putting his family first, his two granddaughters put a sparkle in his eye. The pride he had for our country is something that he showed, honored and shared with us all.