Everett Walter Baumann, 84, of Wells, and formerly of Walters, died Wednesday, Oct. 12, 2011, at Parkview Nursing Home in Wells. Funeral mass will be held at 11 a.m. Monday at St. Casimir Catholic Church in Wells. Visitation will be held 2 to 4 p.m. Sunday at Bruss-Heitner Funeral Home in Wells, and an hour before services at the church on Monday. The Rev. Thomas Niehaus will officiate, and burial will be at Rice Lake Cemetery, Foster Township, Faribault County. Bruss-Heitner Funeral Home in Wells is assisting with arrangements. 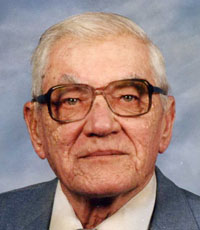 Everett was born Oct. 7, 1927, to Walter and Hertha “Hattie” (Wegner) Baumann, in rural Walters. He had one sister, Mildred. He attended country school at District No. 77 and graduated from the eighth grade. He met Elayne Klocek and they were married on Feb. 15, 1955, at St. Casimir Catholic Church in Wells. The couple lived and worked the family farm while raising their four children: Dale, Robert, Brian and Lisa. Everett farmed and milked cows until he retired. He also worked at Fleet Guard in Lake Mills, Iowa, for 30 years and retired in 1991. His wife, Elayne passed away in October of the same year. After her death, Everett loved to spend his time with his children and grandchildren, reading, farming and fishing. He moved to Kiester, where he bought his mother’s home and lived until moving to Parkview. In his last years he enjoyed having visitors at the nursing home.

Everett is survived by four children: Dale and Luann Baumann, of Kiester, Robert Baumann, of Aurora, Ill., Brian Baumann, of Columbus, Ohio, and Lisa Baumann, of Walters; grandchildren: Courtney and Dylan Baumann, Nikki Abramsen, Alex Baumann, Garret and Elayna Carrigan and Hunter Baumann; and two great-granddaughters: Cassidy and Jayden Abramsen. He was preceded in death by his parents; his wife, Elayne; his sister and her husband, Mildred and LeRoy Stofferahn; and two children in infancy.