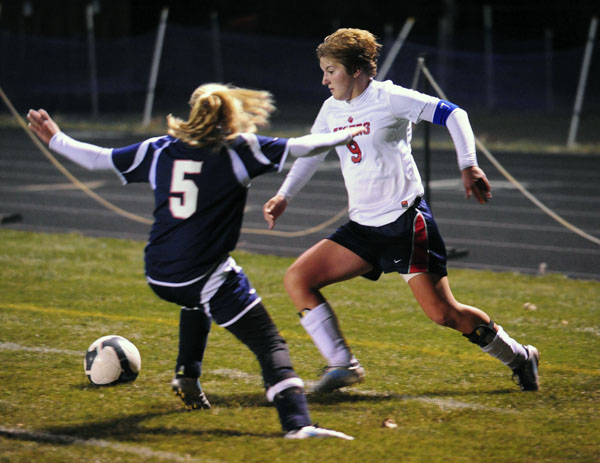 At the beginning of the season it was Rick Barnhill’s goal to win a section title with his Albert Lea girls’ soccer team.

On Tuesday night, that search was pulled to a screeching halt at Hammer Field.

“We played to win,” Barnhill said. “We played with a lot of courage and in a brave manner. We’re just kind of snake bit against them. They just find some way to get a goal against us.”

It marked the second year in a row the Tigers were eliminated in the section semifinal to the Saints, despite outshooting the opponent 25-18 in regulation.

The Tigers pulled out to a 2-0 lead in penalty kicks with only two kickers remaining.

Junior Lindsey Stewart and sophomore Brooke Hanson both hit their marks in the shoot out, but the Saints were able to answer on their final two penalty kicks.

It only took two more rounds of sudden death penalty kicks to find the game’s winner.

Faith Dontje Lindell took the final kick and found a way to slip the ball past Tigers’ goal keeper Hanna DeVries for the game winner.

“It’s like I told them in the locker room ‘It is hard to find words to describe it because it just defies logic,’” Barnhill said.

Strong defenses held the game scoreless through 100 minutes of play — the 80 minutes of regulation and two 10 minute overtime periods.

Albert Lea struggled to find a good opportunity on goal for most of the game, but Taylor Thompson was able to get two good looks at the net in the last 10 minutes of regulation.

Both of her shots sailed just high of the net.

The Tigers bid farewell to just one senior, Kelly Nelson.

“Kelly did a nice job tonight, she has been an emotional and spiritual leader as a senior,” Barnhill said.