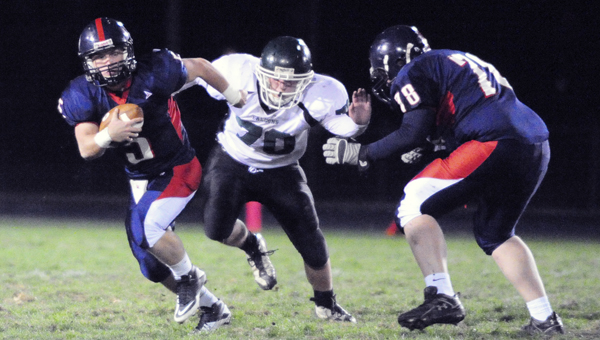 It hasn’t been a secret to many teams of how to dismantle the Albert Lea football team.

Run it up the middle.

But whatever you do, just keep the ball on the ground.

Faribault received the memo prior to Friday nights game, and they did just that, carrying the ball 61 times for 334 yards and six touchdown runs in a 42-17 victory over Albert Lea (1-6, 1-5 Big Nine).

“No matter what in football, it comes down to passion and the heart to go play,” said Max Jeffrey, Albert Lea’s head coach. “I didn’t see a lot of passion in the first half which is disappointing, but the second half was different.”

After the Falcons (4-3, 3-3) scored the games first five touchdowns, three by quarterback Jake Salaba, who finished with 115 yards on ten carries, the Tigers came out to play.

They weren’t going to settle for being shutout. Back-to-back big plays, a 29-yard reception by Cody Scherff and a 33-yard run by Makael Lunning, set up the Tigers at the three yard line, knocking on the Falcons front door.

On the next play Lunning took the inside give and found an opening to slip past the goal line for the score.

“Halftime was a family talk,” Jeffrey said. “It was a gut check time for us.”

“We could have gone one of two ways — we could have packed it in, or we could have come out and play like we know how to play football. And we did that in the second half.”

Albert Lea opened the Svendson 27-yard boot through the up rights.

The Tiger defense gave up a Brett Grossmann 10-yard touchdown scamper on the Falcons ensuing possession, but came right back with a scoring drive of their own.

It only took three plays for quarterback Ethan Abben to find Clayton Bratten on a 33-yard streak down the sideline for the touchdown.

Scoring came a little to late for the Tigers, but Jeffrey was just glad to see Albert Lea move the ball.

“We haven’t moved the ball well all year,” he said. “We challenged our offensive lineman to see if we could move the ball.”

“In the first half we had some runs and guys were blocking like I’ve never seen before and then it seemed like the wheels fell off.”

Albert Lea will travel to Austin on Wednesday for a date with the winless Packers (0-10).

Jeffrey said the players will have the weekend off and watch film on Monday before a longer practice session.

“I have prepared all ready and I’ve seen the film on them. We’re going to be very prepared to play.”