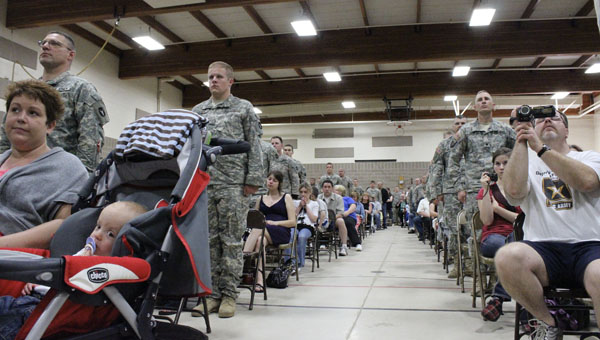 Soldiers with the Albert Lea unit of the Minnesota National Guard stand up to be recognized May 31 during the sendoff ceremony. Families who were there now wonder how the announcement will affect the soldiers in Kuwait. -- Tim Engstrom/Albert Lea Tribune

With local National Guard units Delta Company and the 1135th Combat Support Group deployed to Kuwait family members back home are glad to hear of the Iraq War ending but want people to remember there will still be soldiers deployed around the world.

“We all hope for the mission to be cut short, but there will be a lot of work there to do,” Albert Lea resident Tina Clapper said.

Clapper’s husband, Kevin, is deployed in Iraq and stationed in Kuwait with the Headquarters Company. She said she’ll be glad if the number of troops are downsized, but for right now they’re still there and in danger. 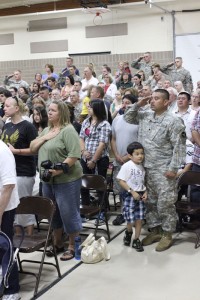 Minnesota National Guard soldiers salute while community residents put their hands on their hearts during the Pledge of Allegiance May 31.

“More than 2,600 soldiers with the 1st Brigade Combat Team, 34th Infantry Division, stationed in Kuwait, are expected to remain until May 2012 performing their important duties of providing security for bases in Kuwait and facilitating the draw down of U.S. military forces and equipment in Iraq,” Olson said.

Lori Nelson, mother of Sgt. Trevor Nelson who’s deployed with Albert Lea’s Delta Company, said overall the news made her glad that the country is in one less war, which she hopes would lead to fewer deployments for soldiers.

Nelson said she thinks with more soldiers going through Kuwait to get home, it could affect the local soldiers who are stationed in Kuwait. Trevor’s girlfriend, Kristy Rowland, a kindergarten teacher at Hawthorne Elementary School, said she’s happy for families of soldiers who are in Iraq that they’ll be coming home.

“It’s hard knowing our guys are helping with the withdrawal,” Rowland said.

Samantha Hall, of Austin, said she’s excited to hear the war is over, but she’s taking the news with a grain of salt. Hall’s husband, Pfc. Jordan Hall, has been deployed in Kuwait since summer and is scheduled to be there until May 2012.

“It’s an amazing feeling,” Hall said. “It’s still hard to believe it until you see it. As a military wife, you learn very quickly to not get your hopes up for anything that the Army says and to never make plans around a date they say your family member is coming home.”

Despite Hall’s uncertainty, though, she’s still happy to hear the troops are coming home. And Jordan will be home on leave for Christmas, which helps with the waiting game. 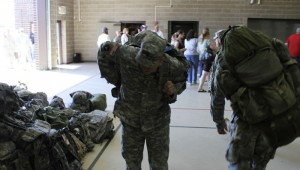 Soldiers with the Albert Lea unit of the Minnesota National Guard load their ruck sacks onto a truck after a sendoff ceremony wraps up May 31.

“With the military, everybody is family so your family isn’t home until everybody’s home,” Hall said. “These guys aren’t out of the clear yet.”

Ali Gibbs, wife of Sgt. 1st Class Trevor Gibbs, of Owatonna, said that while it’s good news troops will be coming out of Iraq, there are many who still have work to do in Kuwait and other areas.

“Hopefully this is the start to a different military climate in our country, but it’s far from the end of our troops being deployed,” Gibbs said.

First District House Rep. Tim Walz said he’s proud of the soldiers and that he’s been calling for a responsible conclusion to the war since he first took office in 2007.

“The president’s announcement today is welcome news, and I am pleased this war is coming to an end,” Walz said. “Let us also pay tribute to those soldiers who will not return home and always keep their families in our thoughts and prayers.”