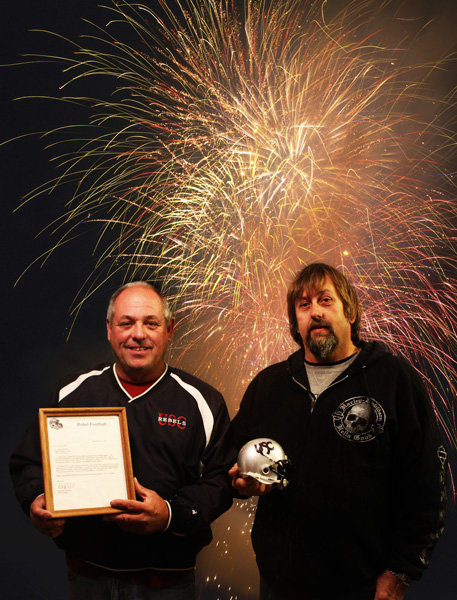 WELLS — Jim Miller and Tim Johnson have introduced a generation of United South Central students to the new standard of school spirit and Rebel pride in Wells.

Johnson likes to revel in their glory and celebrate as an alumnus when USC crosses the pylon for a touchdown by setting off fireworks to celebrate the occasion.

The two men use Johnson’s residence on Fourth Avenue adjacent to John Drugg field, where the Rebels take to the gridiron on Friday nights, as a place to watch football games, tailgate and celebrate victories with the community.

“It is just to show our support for USC and to raise their morale,” said Miller, a 1978 graduate of USC. “We have the same bunch of people who come out on the deck and have a good time.” 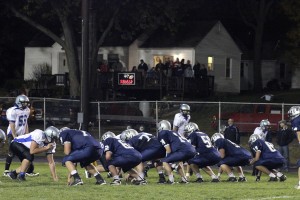 Fireworks are something fans would expect at a professional football game or a college football game, but because of these two men beginning a tradition more than eight years ago, Wells fireworks and high school football work hand in hand.

The pyrotechnics are traditional class C airborne fireworks with double reports. The double report allows for two displays of explosions with the same rocket.

“It was an incentive for them that if they could score we would light one,” said Johnson, a 1975 graduate of USC.

They purchase their fireworks out of the state and only keep enough for the football games.

With airborne fireworks being against the law in Minnesota, the duo have come to an agreement with local law enforcement to permit them to shoot them off only for touchdowns during the games — a strict policy that they adhere to.

“It is an understanding between the two of us,” Miller said. “They’ve seen where we do it from and they see we’re safe enough.”

Because of their unique ways of showing their school spirit they received a trophy and a letter of appreciation from the USC School District. The letter thanked them for the support of the football team’s endeavors.

Spending Friday nights on Johnson’s deck has become a tradition for the families of current USC players, too.

“Some of the parents will show up when their kids get into the program and stay for four years,” Miller said. “Then they fade off, but there are some that have been here for a while.”

On a normal night Johnson can have anywhere from 30 to 40 people at his house for the game. They make traditional tailgating food, cheer on the Rebels and just have a good time. For Homecoming, the meal was chili and grilled cheese sandwiches.

A Rebels win can make a normal night even more special for the two friends. When USC is victorious the players run over and climb up the fence and show their appreciation.

“The kids love it. When they win they climb the fence applauding all the people that congregate over there,” said Steve Miller, Johnson’s neighbor. “It’s a unique deal. I don’t know of any other community that has something like this.