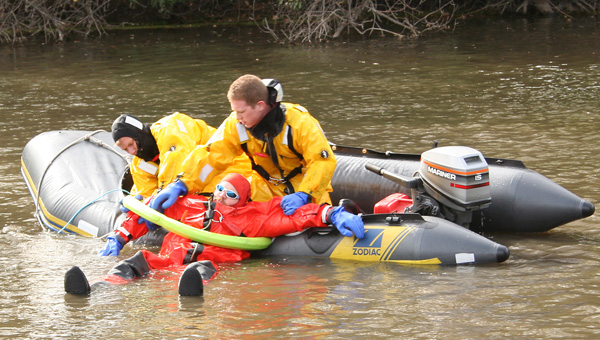 Albert Lea firefighters Kurt Wallace, back left, and Jordan DeVries rescue firefighter Trevor DeRaad Monday during a training session near the boat landing at Brookside Park. The firefighters took turns pulling each other out of the water during a practice in their cold water rescue suits. It was DeVries’ first time practicing with the equipment. -- Photo courtesy Teresa Kauffmann

Albert Lea firefighters took to the waters of Fountain Lake on Monday to practice what to do in case they need to rescue someone from cold water. 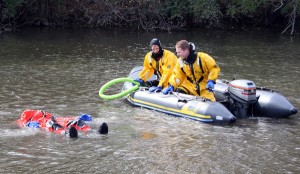 It was the first time for new Albert Lea firefighter Jordan DeVries, who started with the department earlier this month, to wear a cold water rescue suit.

“These things are kind of a new experience,” Albert Lea Fire Department Capt. Mark Light said about donning the suits, which cover the firefighters from head to toe with only a portion of the face being exposed.

The suits are worn in any rescue where the water temperature is under 70 degrees. They prevent the people who wear them from feeling the effects of the weather or water.

“There’s very few places in Minnesota you wouldn’t use them year-round,” Light noted.

Once geared up in the suits, the firefighters took turns wading around in the water near the Brookside boat landing. They were hooked up to a rope and then other firefighters on land held the ropes in case they needed to be pulled back to shore. 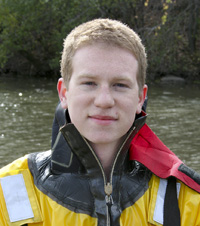 After getting used to the suits, they pulled out the department’s Zodiac inflatable boat and practiced pulling each other out of the water.

Light said the department has been called out to perform cold water rescues at least three times a year during the last three years. Some of the instances they’ve had to utilize the equipment for was during the rescue of duck hunters on Pickerel and Freeborn lakes and rescuing snowmobilers who went into Fountain Lake — or their machines.

“Just last year we were out four times just to pull snowmobiles out of the lake,” he said.

Though it may be early in the fall and winter seasons, Light warned people to use common sense when going out on water at this time of year.

“If you’re going to be out there doing that kind of thing, make sure somebody knows you’re out there,” he said.