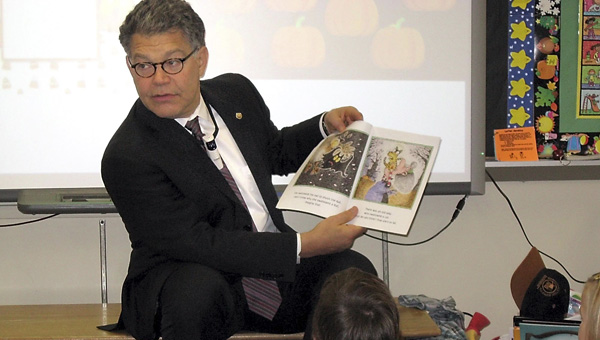 WASECA — U.S. Sen. Al Franken may be but 5-foot-6, but he loomed large Thursday as he cavorted with Waseca grade-school students and touted the reforms he wants to bring to the federal No Child Left Behind law.

“Really, the only thing I liked about No Child Left Behind was the name of it,” he said after touring several classrooms at Hartley Elementary School during a daylong swing through southern Minnesota.

But it became clear that the education reform initiative itself needed reforms, and last week the Senate passed its version of the reform bill, which includes four amendments authored by Franken.

“There was a perversity in the NCLB testing, and one of the perversities was that it wouldn’t allow you to test a child out of his grade level, and that made it harder to measure a child’s growth,” Franken said.

Before, schools were measuring a “bar or proficiency,” otherwise known as a race to the middle, he said. As a result, high achievers and low achievers were effectively ignored.

Franken maintains the new amendments would give schools more flexibility in testing, improve schools through strengthening principals’ leadership, create a stable education environment for foster care children and clarify that teachers don’t need to be forcibly transferred from their schools to meet equal funding requirements.

During his Thursday visit Franken also demonstrated his potential aptness as a grade school teacher, regaling first graders with witty asides as he read aloud to them and looking right at home while sitting in a series of tiny classroom chairs.