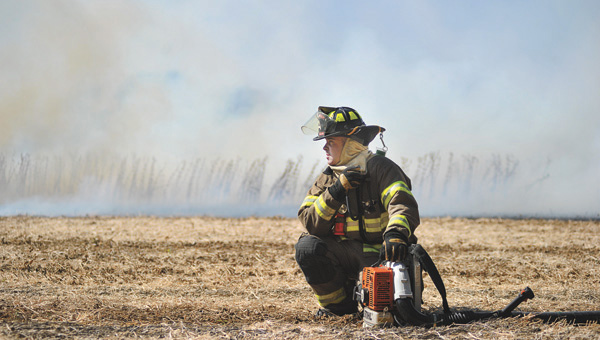 Austin firefighter Chris Grunewald catches his breath while fighting a bean field fire as smoke drifts behind him just on the southwest side of Austin Wednesday afternoon. -- Eric Johnson/Albert Lea Tribune

Several area counties are now under burning bans as dry, breezy conditions coupled with low humidity continue for much of Minnesota and northern Iowa.

A Sheriff’s Office news release stated no new burning permits would be issued until further notice. 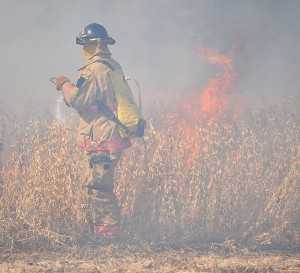 An Austin firefighter puts water on flames shooting up out of a bean field on the southwest edge of Austin Wednesday. -- Eric Johnson/Albert Lea Tribune

“Upon investigation, the fire marshal finds that conditions in Winnebago County are such that open burning constitutes a danger to life or property,” according to the proclamation.

A burning ban has been in effect in Steele County since Tuesday, in Faribault County since Monday and in Waseca County since Sept. 12. Mower County issued a ban Tuesday afternoon.

As of Wednesday afternoon, a ban had not been issued in Worth County, Iowa.

The bans came as the National Weather Service on Wednesday morning issued a “red flag warning” for much of the area, indicating critical fire conditions. The warning continues through today.

It admonished people to use extreme caution if outdoors and using anything that could result in a spark that could start a fire.

“Fires could become dangerous and fast-moving in a short period of time due to the gusty winds and low humidity,” the warning states.

Albert Lea reached a high of 84 Wednesday with southeast winds peaking just after 4 p.m. at 17 mph. Gusts were as high as 25 mph.

Austin firefighters battled a fire in a soybean field Wednesday afternoon for more than an hour. The fire started in a combine and spread to the field.

The fire started when David Hillier, former Mower County commissioner, was combining his field, according to Sheriff Terese Amazi. The fire began in the combine and spread to the field.

Hayward firefighters doused a fire in a harvested corn field on Tuesday. No one was injured.

Weather is forecast to continue to be sunny today with a high near 82. It is expected to still be breezy with southeast winds increasing to between 18 and 21 mph. Winds could gust as high as 31 mph.