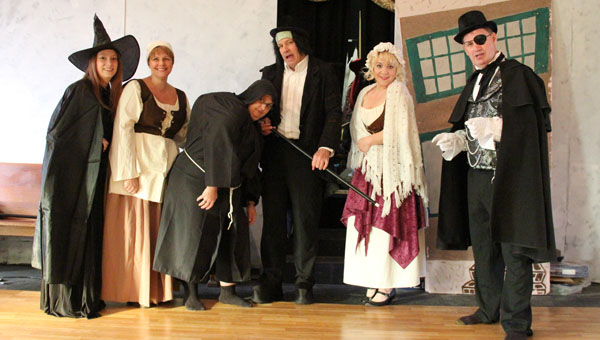 “A Touch of Broadway” will be presented at the Lighthouse Event Center Thursday, Friday and Saturday. The show will feature musical highlights from “Sweeney Todd: The Demon Barber of Fleet Street,” “Wicked,” “Young Frankenstein,” “Phantom of the Opera,” and “Jekyll & Hyde.” Only songs will be performed.

“It’s beautiful music, and no one does these shows around here,” director Gordy Handeland said. 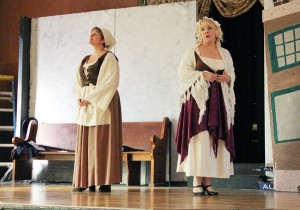 Lisa Sturtz, left, and Carrie Boyer Olvera practice during a recent dress rehearsal for “A Touch of Broadway.” The show will feature songs from “Sweeney Todd: The Demon Barber of Fleet Street,” “Jekyll & Hyde” and “The Phantom of the Opera,” among others.

The audience is encouraged to dress up in Halloween costumes, according to Celeste Krause, part owner of the event center. She said she’s been watching rehearsals and that the actors are doing a great job.

“It’s really going to be a good show,” Krause said. “They are doing a fabulous job.”

The show is similar to the one put on in the Fairlane Building during the week of the fair. That week featured musical highlights from “Annie” and “The Music Man.”

Handeland said this weekend’s shows will include a tap number to “Puttin’ On The Ritz” from “Young Frankenstein” and other famous songs from the various musicals. The songs will follow a theme of darkness, but there are humorous parts like the “Young Frankenstein” part.

“Everything in the show deals with death and darkness,” Handeland said. “But there are some funny bits.”

The cast is made up of Lisa Sturtz, Jordan Wylde, Nancy Lahs, Carrie Boyer Olvera, Bob Sturtz, Aimee Germann and Handeland. Lora Virgil is the accompanist. Tickets are available for advance for $15 at Marshall Street Music, Hy-Vee and Stadheim Jewelers in Albert Lea and at Coffee House on Main in Austin. Tickets are $20 at the door. Each show starts at 7:30 p.m. Thursday, Friday and Saturday.