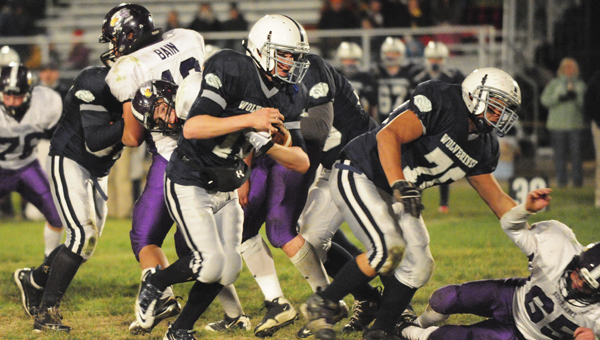 Wolverine quarterback Wyatt Madson takes the ball up the middle for a first down in the second quarter against Grand Meadow. -- Garrett Wampler/Albert Lea Tribune

GLENVILLE — Derek Olson is not meant to be tackled.

On Wednesday night, the Glenville-Emmons junior running back took hand offs to the left, ran draw plays to the right and spun away from multiple Grand Meadow defenders.

Olson’s carries seemed to be the only thing that made a dent in against the tough Superlark defense.

But even with his success on the ground, Grand Meadow ran away the game, outscoring the Wolverines, 33-12.

“I saw kids that didn’t quit, they were hitting hard and kids that were hurting, but still out there fighting,” said Ryan Kelly, the Glenville-Emmons head coach.

The Superlarks jumped out to an early 13-0 lead in the first quarter after a five-play, 56 yard drive and a two-play, 40 yard drive resulted in Grand Meadow touchdowns.

Glenville-Emmons refused to quit and began hammering away at the Superlark’s running backs in an attempt to shut down the running game.

When the Wolverines forced them to pass on the next drive Wyatt Madson was there for an interception. The defensive back returned the ball 55-yards for the touchdown.

“We have some fighters,” Kelly said. “We’ve just got to be consistent. That is what is holding us back.”

Olson added another Wolverines score before halftime with a nine-yard run, stretching across the pylon. He finished the night with 23 carries for 109 yards.

“He can handle the carries,” Kelly said. “The kid is tough as nails.”

“Not that I want him to do that very often, but that is what we were having success with.”

Turnovers and other mistakes plagued the Wolverine attack in the second half.

Their first two drives of the second half stalled on fourth downs. The two drives after that ended in a lost fumble and an interception.

From there Grand Meadow was able to pull away on the ground, finishing with 203 yards to run out the clock.

Glenville-Emmons will find out today who they will face in the opening playoff round.

Most indicators point to an away game at either Grand Meadow or Houston.

Regardless of where the game is played or who the opponent is, Kelly is confident in his team to make some noise in the playoffs.

The Wolverines opened the season with a 2-1 record, with both wins coming by large margins.

Since then, they have struggled down the stretch closing out their season with five straight losses.