Getting the docks out 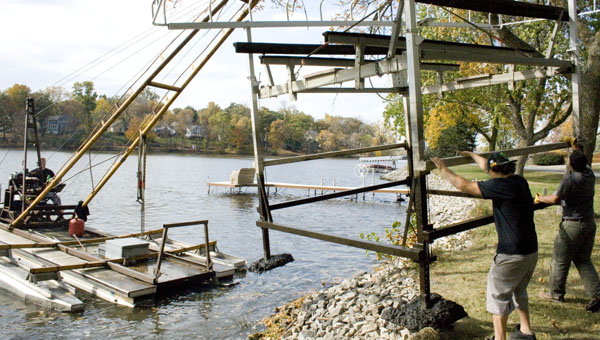 At a time when other summer clubs are packing up for the season, the Bayside Ski Club is in the middle of one of its biggest fundraisers of the year.

From mid-September to mid-October, the club’s members are busy removing and transporting docks and boatlifts from around Fountain Lake in preparation for the winter.

Ski club member Kristen Dulas, who oversees the program, said the club installs and then takes out docks or lifts for between 90 and 100 customers with dock spaces on Edgewater Bay and the main body of Fountain Lake. 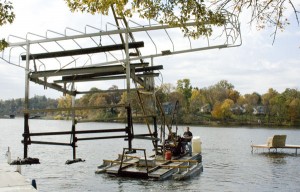 Using what the club calls a barge outfitted with a crane, the club members ride from dock space to dock space.

While one person operates the crane, other people climb from the barge over to the lift or dock and attach it to a large harness strap.

Then the crane lifts the dock or lift out of the water onto the shore.

It’s a much easier process than when the club first started the service. At that time, the club members would use inner tubes and a canoe to maneuver the docks and lifts out of the water.

“It used to be an insane amount of manual work,” Dulas said. “When it originally started, it was many people in the water physically doing everything themselves.”

The new method is easier on the customers’ docks and lifts and on the safety of the club members.

Dulas said the team not only installs and removes the docks and lifts; it can also transport them to a storage facility through the winter months.

The docks and lifts that the club takes out are stored at the Freeborn County Fairgrounds if desired by the customer.

The fairgrounds charges $20 per item stored and that fee is passed straight through to the customer.

Dulas said all money raised goes toward new boats, new equipment and insurance for the club.

This equipment and insurance are vital to the club being able to practice and put on water ski shows in the summer months, she said.

Club members who participate in the installation and removal of the docks and lifts also have a chance to have their membership fee reduced.

“It’s a way to get people to want to do the work and to join the club,” she said.

Families in the club take turns making lunch for those who participate.

Dulas said sometimes the club members partner with another dock and lift remover, but most of the time they work by themselves.

She estimated the crew would finish up at their last sites this weekend.

Out of the water

If people want to find out more about the docks and lifts program, they can contact 507-383-9340. Bayside Ski Club club member Kristen Dulas said she wanted to thank the community for their support this fall.