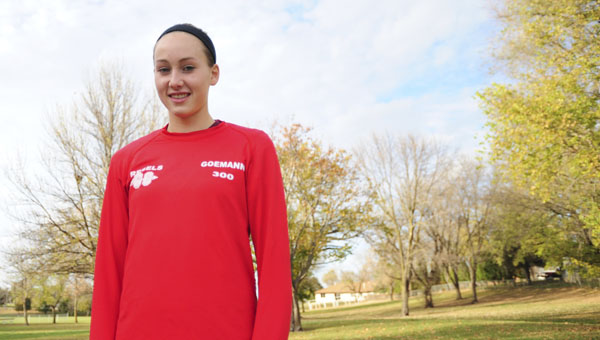 Hannah Goemann is a succesful two-sport athlete for United South Central. The junior has placed in the top 20 at the state cross country meet and seventh at the state track meet. -- Garrett Wampler/Albert Lea Tribune

WELLS — Hannah Goemann runs track and cross country for United South Central, but she doesn’t have a preference. She’ll take whatever sport is in season.

The junior holds state accolades in both. 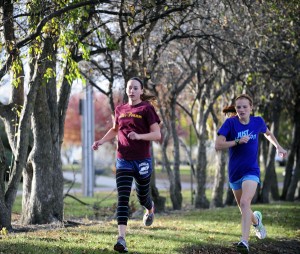 Goemann, left, warms up with a short run with the rest of her Rebels’ teamates during practice on Monday at Half Moon Park in Wells.

Last year, she finished 14th at the state cross country meet and captured a seventh-place finish at the state track meet in the 800-meter run.

“She wants to be as good as she can possibly be at everything she does,” said Kent Viesselman, the USC cross country and track coach. “She is willing to pay the price to do that.”

After another season of after-school practices and meets, Goemann will compete with the rest of the Rebels at the Section 2A meet in Montgomery today, with the hopes of not only advancing to state as an individual but also as a team.

Last week at the Gopher Conference meet, the Rebels were crowned the top team. Goemann placed third overall in the 4-kilometer race.

“I’m just a competitive person and you want to do well for your team and for your school,” Goemann said.

She began running in elementary school and has now been on the varsity squad for five years. 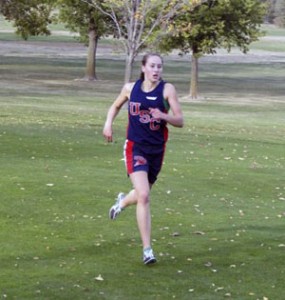 Hannah Goemann runs at Waseca earlier this season. Goemann will make an attempt to qualify for the state meet for the third straight season. -- Submitted photo

Last season’s 14th-place finish at the state meet was a 100-position increase over her 114th place finish during her freshman campaign.

“I was definitely more relaxed last year,” Goemann said. “During my first year at state, being there got to me a little.”

Viesselman said Goemann is a patient runner and usually waits to make her move toward the front of the pack after the halfway mark.

Though gauging cross country performances is hard to do based on finish time, since each course varies in hills, valleys and in difficulty, Goemann believes it is how you run each course that determines your success.

“It is not the course that makes the race,” she said. “You have to make the course work for you.”

The USC head coach, who is in his 47th year of coaching, said the reason Goemann has been so successful is because she is coachable, determined and “the best leader I’ve ever had.”

“She is very sensitive to people’s feelings,” he said. “We had a meet earlier in the year where she got a medal, but one of our seventh-graders was disappointed in her performance.

“Hannah sat with her arm around her the whole time during the awards ceremony.”

Viesselman also said it is remarkable that she handles so many different activities and can still be as successful as she is in athletics. He said she is a 4-H grand champion for the state of Minnesota with the piano, holds a 4.0 grade-point average, the lead in the school musical and has a job at the Kee Theatre in Kiester.

Goemann still finds the time to enjoy being with her team and the bonds that tie them together.

“With a group like we have here, it is a chance to learn about yourself and a chance to be a part of a really tight-knit group,” she said. “These girls are crazy, but we’ll be friends for life, and you don’t get that in every other sport.”