Memorial services for Harlen G. Hansen, 90, of Albert Lea, will be held at 10:30 a.m. Wednesday at Bayview/Freeborn Funeral Home. The Rev. Dwight Netzer will officiate. Burial will be at Hillcrest Cemetery with military honors accorded by the Freeborn County Servicemen’s Organization. Friends may greet the family on Tuesday from 5 to 7 p.m. at the funeral home. To sign the guestbook go to www.bayviewfuneral.com. 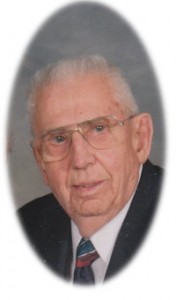 Harlen Gustav Hansen was born on Jan. 24, 1921, in Albert Lea on the family farm the son of Jacob and Katherne (Maire) Hansen. He attended Murtaugh Country school and then served his country in the United States Army serving in World War II. After his discharge he returned to Freeborn County and was united in marriage to Irene Andersen on May 5, 1948, in Albert Lea. Harlen worked for Freeborn County Highway Department as a mechanic and boiler operator. Harlen enjoyed woodworking, fishing, watching sports, hunting and bowling. He also volunteered for Meals-on-Wheels and at Lakewood Cemetery. Harlen was a member of Trinity Lutheran Church and the American Legion. His most treasured times were spent attending the many activities of his grandchildren and great-grandchildren.

Harlen was preceded in death by his parents; in-laws: Chris and JoHannah Andersen; sister and brother-in-law, Myrna and Barney Frazier; brothers and sisters-in-law: Herbert and Evay Hansen and Elmer and Ailene Hansen; and great-grandson, Robert Schlagel III.