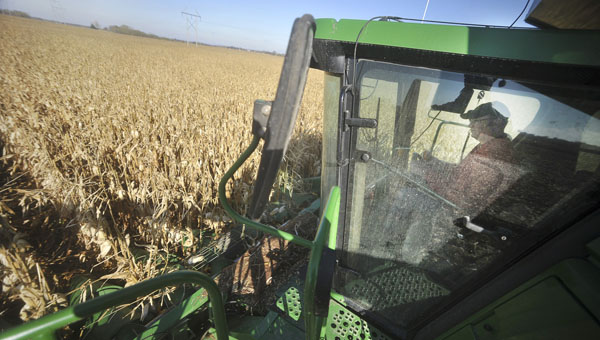 Despite the most erratic growing season in years, fall harvest is looking better than some farmers anticipated.

Though crop production will undoubtedly lag behind last year’s success, farmers are upbeat that they are past all the weather-related agony.

“For everything that we’ve been through, it’s amazing what’s out there,” said Robert Nelson about the quality of soybeans and corn in his fields near Alden.

He and others in the area were surprised to see crops weren’t as poor as anticipated. 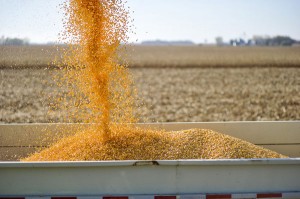 Corn yields in the state Minnesota are expected to be slightly down from last year.

“There are places where it is just flat,” he said, and added, “The better the yield, the worse it blew down.”

Somehow, Nelson said, the stalks held on while he harvested last week.

“In past years, it never would have held itself, it would have just snapped off,” he said.

Farmers near Austin experienced high winds, but not as severely. Yet the weather threw farmers one last curve ball when crop fires became a serious concern the past two weeks. Several fires in southeastern Minnesota were reported during multiple, unseasonable 80-degree days.

“We had a couple of small fires ourselves, but we caught them before they burned anything,” said Corey Hansen, a farmer near Austin.

For farms farther west, Nelson said, “The guys that have been fighting (fires), they say it has just been like gas out there.”

Even after fire, wind and one of the shortest growing seasons in years, yields were only reduced slightly in many fields. Though the hottest portion of summer caused corn to mature too quickly and left some ears without full kernels, farmers were fortunate. From Sargeant and north of that area, much of the soil retained moisture, even during the driest portion of the summer. Nelson’s crops, despite drying and blowing down, held strong. 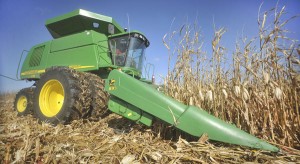 Corey Hansen combines a field of corn Thursday morning south of of Austin. As Hansen waits to see what his yield this year will be, predictions for the state are calling for lower yields all around compared to last year.

“I think I can equal last year’s yields, believe it or not,” he said.

The U.S. Department of Agriculture projects Minnesota’s average yields to trail last year’s, however. In it’s most recent crop production reports, the USDA forecasts 165 bushels per acre of corn throughout the state — that’s 12 bushels per acre fewer than last year’s average, and 30 million fewer bushels statewide.

But if there were one crop that had the odds stacked against it, it was soybeans. After September’s early freeze, much of the Midwest beans shut down growth.

“Then it froze, and it just looked like it was going to be a disaster,” Nelson said about early bean projections, but he changed his perspective after he started picking several weeks ago. “Then it didn’t look quite so bad.”

Area farmers mentioned the quality of beans varied greatly throughout portions of their fields.

Hansen said his worst bean field produced about 38 bushels per acre, but his best field produced nearly 62. Though he also thought beans were going to be bad several weeks ago, he was pleasantly surprised. Overall, Hansen’s production won’t trail last year’s by too much.

The USDA predicts Minnesota’s soybean yields to fall to about 41 bushels per acre, on average. That’s four bushels fewer than last year’s average. Though that may not seem like much, overall state production could trail last year by 41.5 million bushels, as many farmers planted much more corn because of its record high price.

That may have been a smart move.

“I think guys will be generally more pleased with corn than soybeans,” said Jon Hillier, agronomist at Northern Country Co-Op in Rose Creek.

Not only did corn fare better than beans, its price was slightly more stable near harvest time. 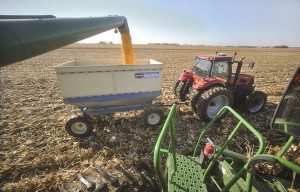 Corn is dumped into the wagon of a tractor rolling along next to Corey Hansen’s combine Thursday morning in a field south of Austin.

In the past weeks, corn prices fell as much as $1.50 cents, while beans dropped more than $3.

“Three dollars is a real big drop — that’s scary,” Hansen said, and mentioned he remembers when beans only fluctuated 50 cents in an entire year.

However, some expect prices to return to where they were this summer, at roughly $7 per bushel of corn and $13 per bushel of beans.

Hansen and Nelson didn’t try to summarize the market or give explanations about its fluctuations. They don’t know exactly what will happen.

“It’s not supply and demand. … It’s more of when you can live with your decision to buy or sell,” Nelson said.

If prices rise again, however, that may be the only factor to compete with Mother Nature this year. Sam Ziegler, director of marketing programs at Minnesota Soybean, said the situation could have been worse.

“At least we’re not getting hit with low prices and a low yield,” he said.

Final USDA crop production numbers should be coming soon, as many farmers hope to wrap up harvesting next week.