Holding a piece of history 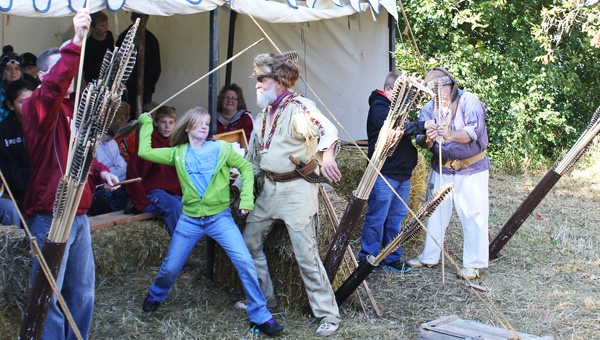 Students learned a not-so-useful skill Friday at Education Days at the Big Island Rendezvous — how to attack a woolly mammoth.

Jerry Shaefer, of Madison Lake, taught local students how to use an atlatl, which is a primitive dart thrower that helped hunters extend the distance they were able to throw. 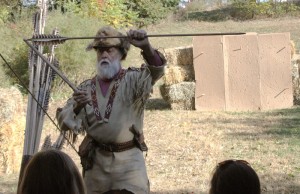 Jerry Schaefer shows a group of students how the atlatl, or dart thrower, extends to help people throw darts farther during Education Days at the Big Island Rendezvous Friday.

“The atlatls you’re using today are out of a piece of wood from 1779,” Shaefer told the students.

Shaefer explained to the students that he had dismantled an old log cabin and crafted the atlatls in 2009. He used dendrochronology, or tree ring dating, to learn how old the wood was.

“Today you get to hold a piece of history,” Shaefer said.

Students first heard from Shaefer about the evolution of the atlatl (pronounced atuhl-atuhl), and how it’s like most inventions that end up being much more effective than the first versions.

All students, teachers and volunteers got to try their hand at throwing a dart using an atlatl at a piece of cardboard that had a woolly mammoth drawn on it. Pam Mosloski, a parent and volunteer, said the children enjoyed the hands-on learning but had also liked the speaking presentations they’d seen so far.

“They’ve really been attentive,” Mosloski said. “We just like the history.” 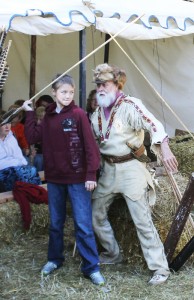 Jerry Shaefer helps students use an atlatl to throw darts at a piece of cardboard with a woolly mammoth drawn on it.

Each school group has a different schedule and move to assigned presentations each half hour. Mosloski said the students from Fairmont Elementary School also had some time to wander at the event. One student, Alyssa Fetters, a watcher of the History Channel, said she’d enjoyed the day at the Rendezvous so far.

During Education Days, which took place Thursday and Friday, more than 3,000 students from southern Minnesota and northern Iowa attend the event held at Bancroft Bay Park. Students and their guides listen to historians, see crafts being made and get some hands-on learning.

The Big Island Rendezvous is in its 25th year, and Education Days started about 22 years ago. Almost 75,000 students have attended Education Days since the event started. There were around 50 presentations this year for classes to visit.

Perry Vining, founder of the Big Island Rendezvous, said students stay for the entire day, arriving anywhere from 8:30 to 10 a.m. and staying until 3 p.m. Most students are in fifth or sixth grade, but there are groups as young as third grade. There is no live entertainment on Education Days, but the entertainment is added for the public on Saturday and Sunday of the event. The festival was open from 9 a.m. to 7 p.m. Saturday and 9 a.m. to 4 p.m. today.