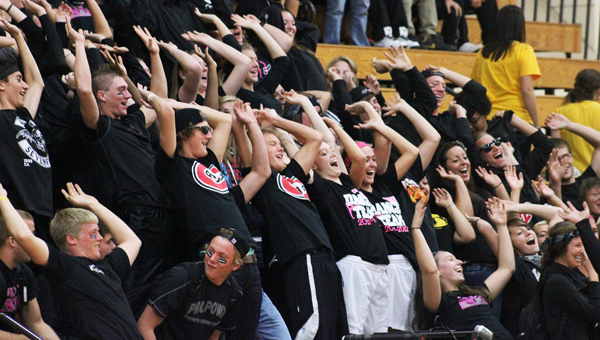 Albert Lea High School seniors do a cheer at the beginning of the pep rally. -- Danielle Boss/Albert Lea Tribune

Teachers and staff gave the students a big surprise during a pep rally Tuesday at Albert Lea High School for Homecoming Week.

Click here to see video of the flash mob.

They started a flash mob and danced to “Dynamite,” by Taio Cruz, which got the students cheering. John Double, assistant principal and activities director, said he’s heard from both students and staff that they hadn’t seen a pep rally with that much school spirit in many years. 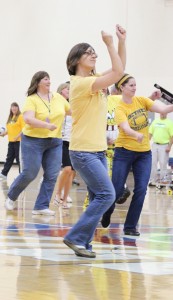 A teacher gets into her dance moves during the flash mob.

“The staff had been secretly planning the flash mob since last year,” Double said.

Diane Heaney was approached by Heather Harms and Julie Ulve about the flash mob and she agreed to do the choreography. A flash mob is when a group of people assemble suddenly to perform, often for entertainment or to make a point. Heaney said staff had been looking for a way to show students they were excited about school spirit, too.

“It was fun,” Heaney said. “I heard a lot of kids say it’s the most fun they’ve ever had at a pep fest.”

More than 50 members of the staff were dancing and had learned the dance during secret practices and by watching a video of the choreography Heaney had posted on the school’s internal server.

“We had several after school and morning practices where we blocked the windows and locked the doors,” Heaney said.

For all the other parts of the rally, the student council was in charge of organization. Each fall sport’s captains introduced themselves, talked about highlights from the season and encourage students to attend sporting events. Double said it was a unique pep rally because the eighth-graders were in attendance.

Senior Macy Paul, a member of the student council, said the council has been working on selling patriotic magnets for $1 during lunch periods. They hope to find students who have a family member deployed with the military and send those people care packages.

“I like that we’re giving back, and we know where it’s going,” Paul said. 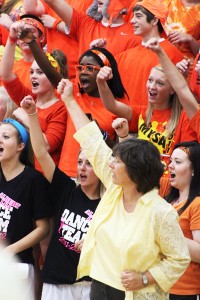 Students and faculty cheer during the pep rally.

Double said he was proud of the students for coming up with the idea and working on it all week.

“To me it’s outstanding,” Double said. “I’m very, very proud of them for coming up with that on their own.”

Each day during Homecoming Week events are planned. Monday was the coronation, held at 2 p.m. in the auditorium. Juniors and seniors could attend the event and saw Stuart Behling crowned king and Kelly Nelson crowed queen. The coronation was broadcast to the rest of the students. Tuesday there was a pep rally at 11 a.m. and early dismissal. Wednesday is the day of the senior dinner and dance. Thursday will have the boat race in the pool in the afternoon, and Friday there’s an early out and Homecoming activities at Hammer Field from 1 to 3 p.m.

Dress up days are another tradition continuing this week. Monday was a day for students to pick a decade like ’70s or ’80s, Tuesday had each grade wearing a different color, today will be camoflauge or military clothing, Thursday is a day to dress like a villain and Friday will be to wear cherry and blue colors.

Double is excited that all sporting events will be free to students and staff in the whole district this week. Home games include Tuesday night’s girls’ soccer, Thursday night will have girls’ tennis, boys’ soccer, girls’ swimming and girls’ volleyball.

“I’m very excited about the opportunity for all the students in our district to come check out our athletic programs,” Double said. “I hope they come to all of them.”

Friday night the football team will face Mankato East at 7 p.m. at Hammer Field. Following the game are dances at the high school, one for eighth- and ninth-graders and one for sophomores, juniors and seniors.

“The big thing is making sure all the students stay safe,” Double said. “We know that we’ve got really good parents and students in our community.”