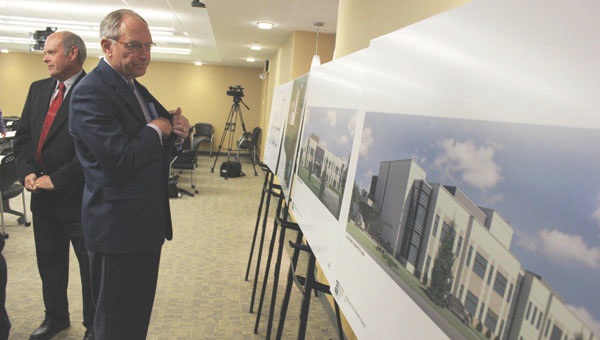 AUSTIN — The Hormel Institute has officially announced its plans for expansion.

In a presentation to state capital investment committee leaders, Institute officials unveiled their plan for a $27 million expansion they say would create 125 high-paying jobs. The expansion would take place on The Hormel Institute’s existing land, with 23 properties purchased to the east used for parking.

State representatives were invited to Austin to discuss the Austin Port Authority’s request for $13.5 million in state bonding funds, which would cover half of the expansion cost. The rest of the funding would be through an Austin Port Authority bonding issuance, meaning the port authority would own the expansion and the Hormel Foundation would be in a contractual agreement to make bond payments. 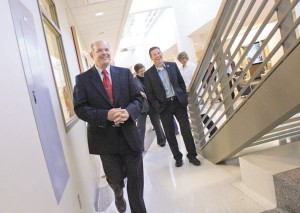 No local property taxes would be used to pay for an expansion, City Administrator Jim Hurm confirmed in June.

“We are very excited to have you here and have the opportunity to display what is a great potential and all the great work that has been done here already,” said Rep. Jeanne Poppe, DFL-Austin, to state capital investment committee members, including the chair, Rep. Larry Howes.

Jerry McCarthy, chairman of the Port Authority, said everything is lined up, including the architectural drawings, and they are just waiting on funding.

“This is a shovel-ready project,” he told state representatives. “You give us the money, and we’ll start digging tomorrow.”

Connected to the east side of the institute on its existing land, the expansion would be three stories and add 15 research laboratories. The 73,750-square foot addition would nearly double the size of the existing institute.

The Hormel Foundation, through Leaning Tree LLC, has purchased 23 properties since September 2010 directly east of the institute, which officials announced Monday would be for a parking lot, as the expansion would be built over the existing lot. Gary Ray, vice chairman of the foundation, said they bought the number of houses they need.

The Hormel Institute, founded in 1942, tripled its size with an expansion in 2008 and since has gone from 60 employees to 130. Now, it’s at full capacity and ready to expand again.

“Bioscience is one of the fastest growing industries in the country,” said Ann Bode, associate director of The Hormel Institute. “We think we here in southern Minnesota are in the center of it.

“Basically, we’ve been able to acquire technology that I believe is some of the best in the state, if not in the country.”

The 125 new jobs would have an average starting pay of $40,000 to $50,000. Bode said many of the new jobs would be paid by Mayo Clinic, as the institute renewed its partnership on Oct. 4 with Mayo and the University of Minnesota for “translational cancer research.”

“We do basic science research here,” Bode said. “We find mechanisms of action, how drugs work and (Mayo) is very clinically oriented. So the idea is we will combine our expertise to get our science into (Mayo Clinic) through translational research.”

Howes said he was very impressed and said the jobs are needed, but he gave every bonding request in The Hormel Institute’s price range a 50 percent chance.

“It just depends on the size of the bill and what our economic forecast looks like in February,” he said. “Everybody has a shot. What I’m trying to focus on is public safety, (infrastructure and repairs), and science and technology, and this falls into an area we’d like to do. Rural Minnesota is an excellent place to do this.”

Howes said in a tight fiscal situation, most requests of $30 to $50 million would be rejected, but smaller projects, like the institute’s, have a good chance.

“With this size project and lower, you can get a lot more done statewide, which is good,” he said. “We’d like to touch every corner of the state if we can.”

“A lot of our donors are still paying from the last expansion,” he said. “We didn’t think we would need to expand for another 10 years, but we’ve just kind of exploded. It’s really grown and it’s great to see.”

Rep. Rich Murray, also in attendance, said this is exactly the type of project Minnesota needs.

“These are good-paying jobs in outstate Minnesota,” he said. “It doesn’t get any better than this.”