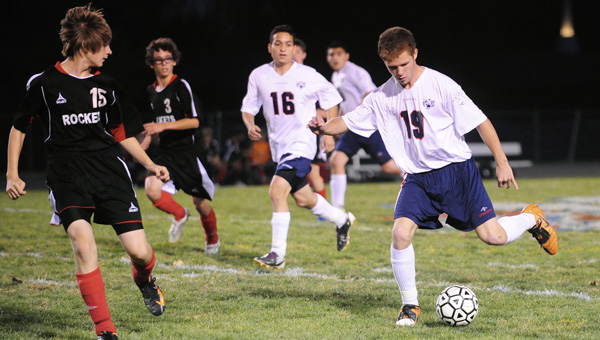 The Albert Lea boys’ soccer team gained some much-needed momentum Thursday with a 2-0 shutout of Rochester John Marshall in its regular season finale at Hammer Field.

The Tigers’ Sean Laurie drew and scored on a penalty kick in the 30th minute of the first half, and Tyler Shaw scored the team’s second goal in the 65th minute off an assist from Elias Lazaro.

“We played hard, we played together and our defense was really stiff tonight, stepping up and winning balls in the middle third,” Tigers coach Elia Romano said. “We made fairly good decisions on the ball and really wanted this win.”

Tigers goalkeeper Cameron Hove made an important save midway through the second half with Albert Lea (4-9-1, 2-7 Big Nine) leading 1-0.

On a one-on-one breakaway, a Rockets (0-11-3, 0-6-3) player shot the ball toward the top corner and Hove made a diving save, punching the ball off the crossbar.

“It was a real turning point in the game,” Romano said. “He had a great game and clean sheets have been hard to come by this year. He definitely deserved it.”

Coaches voted on Section 1A Tournament pairings today and the Tigers open the postseason on Tuesday, likely on the road, according to Romano.