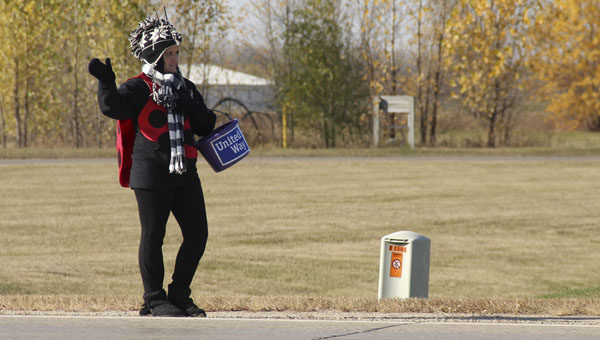 The United Way of Freeborn County will keep experimenting with its annual Keep the Fires Burning fundraiser to find out what works best for the community.

Keep the Fires Burning on Friday changed location and a mini campout was held at the Northbridge Mall parking lot. In 2010, volunteers collected money in buckets on the corner of Broadway Avenue and Main Street in Albert Lea.

“Some people thought it might be good to have it in a spot so people could pull in,” said Ann Austin, executive director of the United Way.

This is the sixth year for Keep the Fires Burning, and Austin said it’s still a work in progress. The fundraiser comes smack in the middle of the United Way’s annual fall campaign. Next year she’d like to experiment and try a different type of fundraiser.

There was a fire burning at the campout at Northbridge Mall and volunteers were asking motorists for any money or change they had from 7:30 a.m. to 5 p.m. Friday. Garry Hart from Cedar Valley Services was one of the volunteers out helping.

“We receive funding from the United Way so it’s always good to help,” Hart said.

Hart s aid people from Cedar Valley Services help with this fundraiser as well as the wine tasting event that’s coming up next week and various other United Way fundraisers throughout the year.

New this year was a Halloween costume contest, which Austin hoped would attract more people to the event. Another new feature was anyone who donated more than $10 got a s’more with a marshmallow roasted right over the fire. Austin said she was thankful for the help of Albert Lea Fire Capt. Scott Hanna for making sure the fire was burning safely and for Alamco for its donation of wood.

Austin said the fire reminds her of coming home to a warm home heated by a fireplace, which also makes her remember that not everyone has that situation. Austin said the United Way’s goal is to make sure the community remembers to take care of its neighbors.

So far this year the United Way has raised more than $126,000 toward its goal of $661,000. The campaign ends Dec. 31. Austin said the United Way funds programs essential for the well-being of the community. The programs benefit community members of all ages and focus primarily on education, income and health.

Fountain Warehouse Liquor’s holiday wine tasting event will be Nov. 4. There will be more than 70 wines and beers to taste. Austin said there will again be a holiday-themed silent auction and said this year there will be local artists displaying their works. The event will be held at Wedgewood Cove Golf Club from 6:30 to 8:30 p.m. The $20 donation per person goes to the United Way campaign.

Austin said the United Way will be holding what’s called Give to the Max Day on Nov. 16. The fundraiser will be online so people can donate with credit cards toward providing snacks to all elementary school students in the area. A grant last year funded snacks for all children, and it wasn’t available again this year so only students whose parents paid for the snack program are getting snacks.