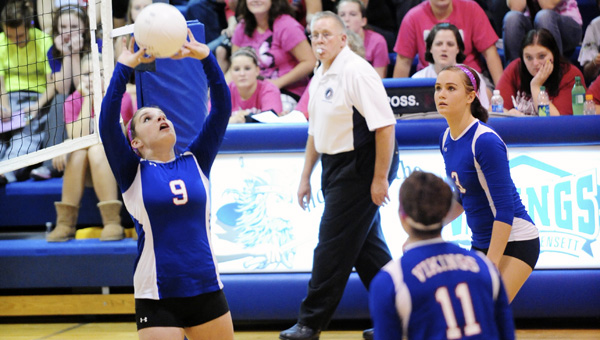 The Vikings swept the Knights in two games on Nov. 10 but after a 2-11 start, Newman Catholic has won five of its last nine games.

“We walked in maybe a little overconfident,” Vikings coach Bess Eilertson said. “We’ve seem them before and had no problem with them. Obviously they’ve improved.”

Britney Low and Tessa Bratrud each had a team-high seven kills, and Bratrud led the team with 14 digs.

After jumping out to a 2-0 lead in Game 1, the Vikings surrended 10 consecutive points and struggled with the Knights’ Jena Stallsmith’s serve. The Vikings found a groove late, scoring six of the set’s final nine points but it was too late. The Knights’ six-foot hitter Jessica Balek scored three of the Knights’ final five points on kills and was the focus of her team’s offense throughout the match.

Eilertson said the team knew trying to block Balek wasn’t the answer so she worked with her players on court coverage to limit her opportunities.

“I think the girls actually did pretty good,” Eilertson said. “There were a few that (Balek) obviously got but she does a pretty good job hitting down line.”

The Vikings got off to its best start in Game 2, leading 5-2, but lost the lead at 6-5 and never led again.

Back-to-back kills by Low pulled the Vikings within 11-10, but the Knights won nine of the next 10 points and built a 20-11 lead puncuated by a kill from Balek.

After falling behind 24-16, the Vikings scored five straight points to pull within 24-21 but Kelsi Brockman’s kill attempt went out and the Knights survived the scare.

The Vikings conclude the regular season tonight against CAL in Latimer. The team then opens the Class 1A Region 6 Tournament on Oct. 19 at Ventura.